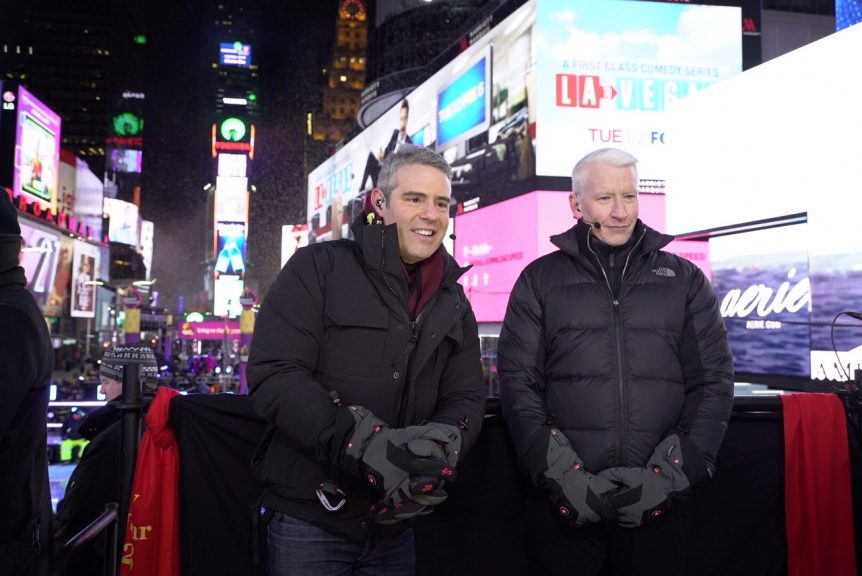 Frigid weather across much of the country proved to be a positive for networks broadcasting the New Year’s Eve festivities. The broadcast nets posted year-over-year total audience growth, and both CNN and Fox News posted growth in prime time.

For CNN, the subtraction of Kathy Griffin and the addition of Andy Cohen as Anderson Cooper‘s New Year’s Eve Live cohost paid off.

Cohen and Cooper co-hosted the always-raucous broadcast for the first time together, and they were joined in Times Square by CNN’s Richard Quest. CNN’s Don Lemon and Brooke Baldwin were reporting from New Orleans, Randi Kaye was in Denver aboard a Cannabis Tours Puff, Pass and Paint Party bus, and other CNN correspondents were scattered across the country. Keith Urban and Nicole Kidman checked in from Nashville, and Dave Chappelle and John Mayer chatted with Cohen and Cooper from L.A.

This year’s New Year’s Eve special delivered 1.7 million total viewers in prime time, and 705,000 from the A25-54 demo. Those are prime time audience records for the CNN special, and +29 percent in total viewers, and +39 percent growth in the demo versus the previous year’s record-setting broadcast.

Fox News’s All-American New Year posted year-over-year growth in total viewers as well (+6 percent), and held steady in the key A25-54 demo during prime time. This was the debut of Jesse Watters and Kennedy as co hosts of Fox News special, taking over for former Fox Newser Eric Bolling and Kimberly Guilfoyle.

The broadcast was +8 percent in total viewers during the time period versus last year, and flat in the A25-54 demo.

Fox News’s broadcast, however, was down year-over-year. FNC was -12 percent in total viewers and -17 percent in the news demo.