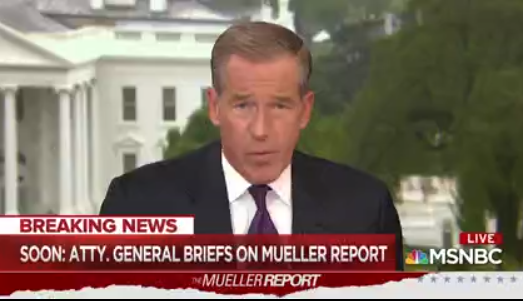 If you watched MSNBC’s coverage of the AG Barr press conference and the special counsel Mueller report last Thursday, you saw Brian Williams and Nicolle Wallace on-air for six consecutive hours, from 9 a.m. – 3  p.m. Without a break.

Williams and Wallace have become two of the network’s most popular personalities, which leads Politico Morning Media’s Daniel Lippman and Paul Volpe to write: “The Brian Williams comeback is complete. Almost.”

Williams has fought to to regain viewers’ trust after being booted from the NBC Nightly News and given a 6-month suspension from the network in February 2015 for telling and re-telling the story of being in a helicopter that came under fire during his coverage of the Iraq War in 2003. A story which turned out not to be true.

NBC chairman Andy Lack brought back Williams, gave him the title of “breaking news anchor” on MSNBC, as well as the 11 p.m. hour. Appropriately named The 11th Hour, the Williams-helmed show launched in Summer of 2016, and was meant to be a “pop up show” in the lead up to the presidential election. But “pop-up” turned into permanent after the program saw early success.

Williams was profiled by Vanity Fair back in Oct. 2017, telling the magazine the 11 p.m. show “may turn out to be the best job I’ve ever had.”

In addition to what had been a successful run as NBC Nightly News anchor (pre-scandal, of course), where the newscast was consistently No. 1 across the board, some may recall that Williams was one of MSNBC’s original anchors, and there is definitely a familiarity among viewers there.

Perhaps that’s why in 2019 to-date, Williams is the most-watched cable news anchor in the 11 p.m. hour.

The trust has returned. At least among MSNBC viewers.

Then there’s the #MeToo movement.

“Williams’s transgression is hardly mentioned anymore, perhaps because he apologized and accepted the punishment, or because of the time that has passed. But it also has receded in the public attention in part due to the much more serious and salacious accusations about some of his peers — Matt Lauer, Charlie Rose and Mark Halperin, among others — documented as part of the #MeToo movement.

However, not everyone inside 30 Rock is convinced Williams deserves a second chance, according to Politico.

“I think there is a little bit of resentment that somebody who made such a glaring mistake and an intentional mistake and a deliberate mistake was given such a high profile second chance,” said the MSNBC journalist, who nonetheless praised Williams for how he’s done in his return to journalism. “I don’t know what the equation is for who gets a second chance and who doesn’t and what a second chance looks like.”