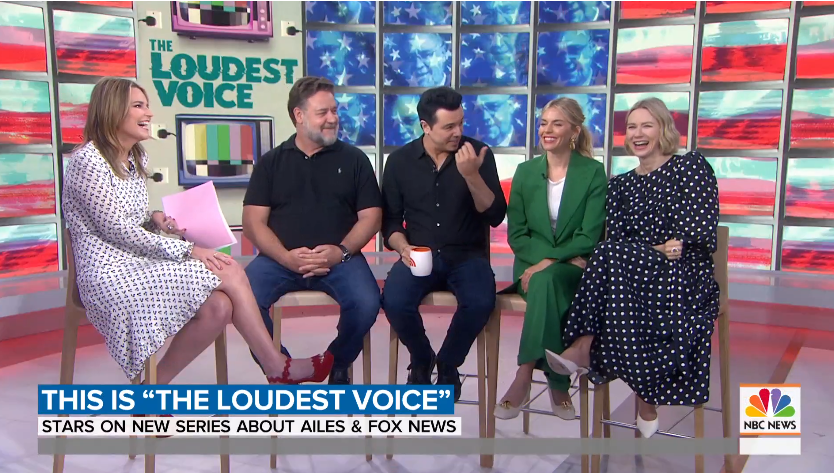 The cast of Showtime’s upcoming series The Loudest Voice –Russell Crowe, Sienna Miller, Seth MacFarlane and Naomi Watts– appeared on NBC’s Today to talk about The Loudest Voice, the upcoming Showtime series that sheds light on the late Roger Ailes, the founder of Fox News who faced allegations of sexual harassment, and ultimately departed the network in July 2016 in the face of those allegations.

Ironically, the program on which this interview was taking place (Today) previously had its own problems when it came to sexual harassment. Guthrie’s former Today show co-anchor, Matt Lauer, was fired from NBC News in November 2017 after a “detailed complaint” of “inappropriate sexual behavior.”

Naomi Watts plays Gretchen Carlson in the series, and explains what attracted her to the role:

“A woman to be able to take down a man of that level of power – that’s pretty impressive and took a lot of courage. Like Russell [Crowe], I saw a lot available on the internet, her books to read, there’s plenty available. But there was a certain thing that gave me a  whole lot of insight, and that’s when she was playing the violin with so much ferocity and focus in a way that told you a story that she had probably made certain sacrifices in her life to be so successful at that. And she was very good at her job, she was at the peak of her career, and to be under-valued and pushed aside because of the way the Fox system worked; women were told to stay in their place, to fall in line and not push back, and she wouldn’t settle for that.

The real-life Gretchen Carlson was thankful for Watts’ remarks:

Thank you #NaomiWatts for helping so many other women by talking about the courage it takes to come forward. @gabrielsherman @SHOLtdSeries @Showtime #TheLoudestVoice https://t.co/lrFHPI9nNG

Seth MacFarlane, who plays former Fox News PR chief Brian Lewis, remarked that Gabe Sherman‘s book was the biggest resource for him. “It was a pretty impressive tome. I made sure to read it front to back before I even started. It was an education for sure.”