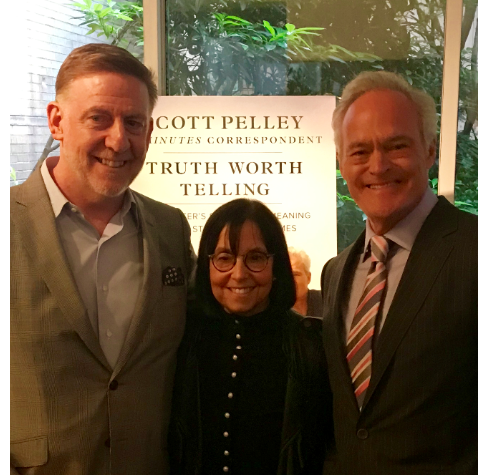 Who were some of the attendees?

This celebration was notable for a number of reasons.

From a TV news business perspective, Pelley caused some controversy during the May 26 broadcast of CNN’s Reliable Sources, when he told CNN host Brian Stelter that the network had “been through a dark period of the last several years of incompetent management and sort of a hostile work environment within the news division. I lost my job at the Evening News because I wouldn’t stop complaining to management about the hostile work environment.”

Any hard feelings that may have come to the surface as a result of those comments have apparently vanished.

Zirinsky sung Pelley’s praises in her opening remarks at the celebration, before giving way to Owens, a longtime colleague of Pelley’s who told an amusing story about when they first starting working together. Pelley was a young correspondent covering the NBA Playoffs and Owens was his producer. He instructed Pelley to chase down then-Houston Rockets head coach Rudy Tomjanovich after a big win (presumably the ’94 Finals). Pelley, whose knowledge of the NBA was apparently limited, ran up to the coach and yelled: “Rudy.” The coach turned around, but Pelley was unprepared and didn’t immediately have anything to ask.

Pelley then gave remarks of his own.

“I have received too much credit for the work of others. I have never won an award, or broadcast any story for that matter, without the sound engineers, editors and producers…and occasionally the executive producer,” Pelley quipped, motioning towards Owens.

He then added: “Hundreds of men and women of CBS News have supported me with physical courage, astounding talent, and exhausting hard work. Their sacrifice is humbling. To all of you at CBS News all around the world: Please know that I am forever grateful.”