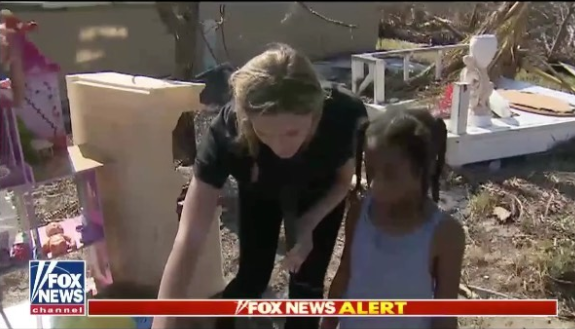 About four days in, she was told about the Children’s Emergency Hostel in Nassau which had received the highest number of children they’d ever had at one time due to the Category 5 hurricane. Barber and her production team met some of the children at the emergency hostel, one of whom had the same name as her best friend.

Barber took off her professional journalist cap for a bit, and decided to pick up some supplies the hostel was in desperate need of. She mentioned it in passing to her friend over text who had the same name as the little girl she had met before. Without her asking, the friend Venmo’d her money to pay for some of the supplies.

The following morning, Barber woke up to more Venmo donations from people she had never met who were friends of her friend. She mentioned it to her mother and sister, who also sent her money. This continued until she had over $600 in donations, which she matched with her own money. All of this money was used to purchase supplies for the hostel – diapers, bottles, snacks, clothing and other essentials.

Since returning to stateside, Barber has continued to receive money from friends and strangers looking to help the people affected by the storm. She has started a Go Fund Me to continue to provide supplies to the children at the hostel, which to-date has raised over $2,200.

Barber shared Instagram stories and posts of what she had seen and the state of emergency in the area during her six-day trip.

The Bahamian government has denied allegations that officials are rejecting or stalling aid for the Abaco Islands in a bid to pressure remaining residents to evacuate. Three sources working with nonprofits told Fox News on Tuesday that Bahamian officials encouraged them to hold off on delivering items like generators and water filtration systems to the Abaco Islands, which were devastated by Hurricane Dorian last week. At the same time — some say supplies are not getting to the right places. In Marsh Harbour, neighborhoods like “Pigeon Pea” and “da Mudd” are empty. All that appears to be left are piles of rubble and the bodies buried underneath them. On a nearby dock, pallets of emergency ready meals sat untouched for most the afternoon. In one grocery store, shelves are filled with food. Boxes of donated food are scattered about, but they are unopened and only a handful of people were coming for supplies. Some say supplies are not getting to the people who need them fast enough — and many of those in need have already evacuated to Nassau. MORE: https://www.foxnews.com/world/bahamas-government-denies-reports-it-discouraged-dorian-aid

Her reporting also featured the survivors of the storm, including a young girl who herself was now a resident at the hostel. Here’s Barber doing a hit for The Daily Briefing with Dana Perino earlier this week.