NEXT:TV Newsers Are Braving the Elements to Report on Hurricane Harvey
PREVIOUS:Harvey is a Category 4 Hurricane With 130 MPH Sustained Winds Heading To Corpus Christi, TX 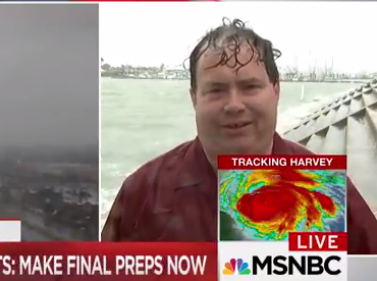 Rep. Blake Farenthold did live interviews with both CNN and MSNBC earlier today, and he did them while outdoors and absolutely soaking wet due to intense rain from slowly-approaching Hurricane Harvey.

Farenthold was born in Corpus Christi and now represents the city and surrounding area in the U.S. Congress.

When asked by MSNBC’s Ali Velshi why there hasn’t been a mandatory evacuation issued for Corpus Christi, considering the forecast for the city, Farenthold responded by saying:

“Corpus Christi has a sea wall that I’m standing on that was designed by the same guy who did Mount Rushmore. It has protected us through several hurricanes, but low-lying areas definitely need to be a concern…folks who are staying need to do their due diligence and have plenty of food and water on hand for several days.”

Here is Farenthold talking to Velshi and Stephanie Ruhle:

Congressman @farenthold worried about storm stalling ashore, “so folks have to make do with supplies they have” https://t.co/M1o5pobbjJ

A nice gesture by the congressman to do the live shots in the midst of this weather.