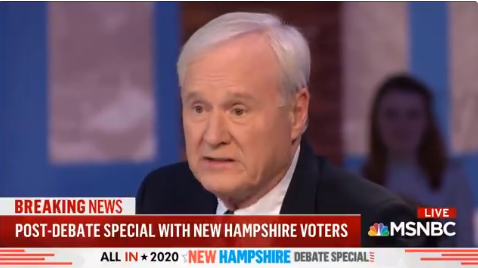 Chris Matthews’ abrupt retirement from MSNBC has us asking a lot of questions:

MSNBC didn’t comment on what its future plans are when we reached out to them on Tuesday afternoon. From what we can tell, there doesn’t seem to be a time frame when it comes to naming a permanent host for the hour. For now, 7 p.m. will be helmed by a rotation of MSNBC newsers, most notably Steve Kornacki, NBC News and MSNBC’s National political correspondent who became Matthews primary fill-in nearly three years ago.

Kornacki has to be considered a top-tier candidate for the permanent 7 p.m. host role. In addition to his strong politics background, and role as Matthews backup, he has experience as full-time host of a cable news show. In 2012, he co-hosted the now-defunct MSNBC weekday panel show The Cycle. From 2013-2015, Kornacki hosted the two-hour MSNBC weekend morning show Up.

A trendy option has to include Nicolle Wallace, who has established herself as a popular host on the network as host of its 4 p.m. hour. MSNBC’s audience is overwhelmingly female, and slotting in a woman host, especially one who has delivered high ratings during her time as a host, would make a lot of sense.

Another option at 7 p.m. has to be Joy Reid, an MSNBC mainstay on weekend mornings, as host of AM Joy. If Reid were given the 7 p.m. hour, she would join Fox News’ Harris Faulkner as the only African-American female hosts on weekday cable news. MSNBC traditionally averages more African American viewers than its counterparts. Needless to say, inserting Reid into the hour could also make some sense.

Katy Tur could inject some youth and energy into MSNBC weeknight schedule as well. She has become a household name to cable news fanatics, going back to her days covering Trump during the 2016 campaign, and has established herself as a strong mid-afternoon host on the network.

Ari Melber has a cult following in the 6 p.m. hour. Perhaps a move to 7 p.m. could be in the works?

It’s not quite 6:30, but moving Brian Williams back to the evenings is something worth thinking about. His ratings were quite strong in 2019, though they’ve tapered off a bit in 2020. But then again, MSNBC has lost some momentum on the ratings front in general this year to-date. However, per previous reports, Williams seems perfectly content at 11 p.m.

Maybe Matthews’ retirement gives MSNBC an excuse to revamp the entire weeknight schedule, not exclusively 7 p.m. Page Six reported earlier this year that MTP Daily could be moved out of the 5 p.m. hour, with Deadline: White House with Nicolle Wallace airing for two hours on weekdays (4-6 p.m.).

Yes, we’re talking about television news free agent Shepard Smith. The former Fox Newser, who left the network last fall due to differences with some of the network’s prime time hosts, is valued by executives from all of the major networks. Maybe a marriage between Smith and Fox News’ main rival will materialize.

TVNewser readers seem to think that may be the case. According to the poll below, created Monday night, Smith is in the lead, with Wallace not far behind. Feel free to vote if you haven’t already. We’ll close the poll and release the final results at the end of the week.

During Tuesday morning’s telecast of Morning Joe, we noticed a remark by longtime contributor Mike Barnicle, who said “he’ll [Matthews] be back.” Perhaps we misinterpreted the remark; perhaps not. But a source did tell us that Matthews could return to the network this fall in a contributor role, right in time for the general election, and after the dust has settled. We’ll see if that happens.