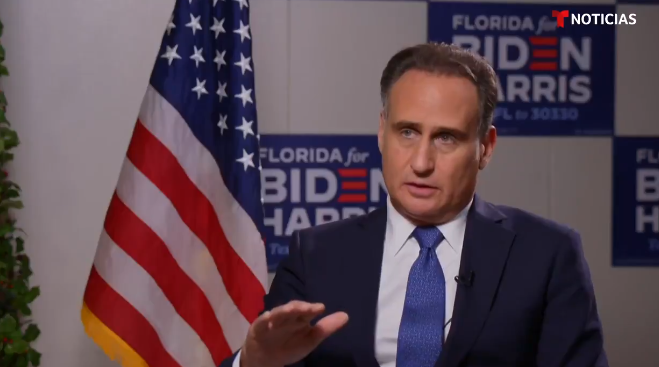 Telemundo anchor Jose Díaz-Balart, Telemundo News president Luis Fernández and the network as an entity have shot down the claim that Joe Biden may have been reading answers to Diaz-Balart’s questions from a teleprompter during their interview last week.

In a viral video that has drawn more than 1 million plays on Twitter, Biden answers a question about deportations in an interview with Díaz-Balart, saying that he would  “freeze deportations for the first 100 days” and only deport “people who committed a felony while here.” At one point, he turns toward a monitor and says, “I lost that …”

After making that statement, Biden’s line of sight shifts forward to Díaz-Balart, who asks him to clarify his position.

Biden then seems to express confusion at what seems to be a technical difficulty. Díaz-Balart, cognizant of this, tells him: “We can talk, you and I, on that.”

The account that posted the video and right-wing, pro-Trump websites speculated that Biden was reading from a prompter.

The president’s son Eric Trump and senior advisor Jason Miller tweeted and commented on the video.

He’s not even pretending to look at the interviewer! https://t.co/rfaUJ7BlfH

Asked about the incident Wednesday by Politico, Díaz-Balart said Biden did not use a teleprompter in their interview and was just answering viewer questions coming from an off-camera monitor.

The news division’s president fired back at Trump’s son and pro-Trump voices denigrating the interview via social media.

Exactly. Absolutely false. @TelemundoNews has never allowed someone who is being interviewed on its news programs to read answers from a teleprompter which would be a clear violation of its editorial policies and standards. 👇 https://t.co/iofls9EQEc

“Noticias Telemundo has never allowed someone who is being interviewed on its news programs to read answers from a teleprompter which would be a clear violation of its editorial policies and standards,” the network said in a statement.

Telling it like it is. Las cosas como son. 👇 https://t.co/ypCYzSMzt4