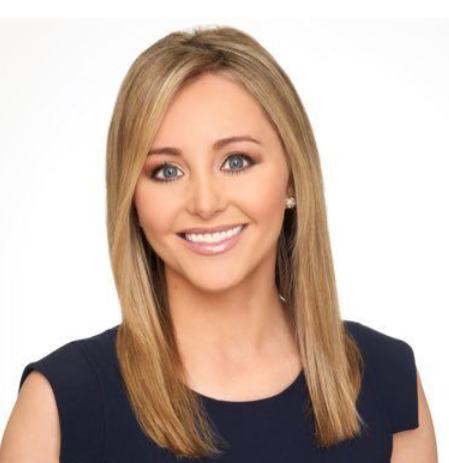 Taylor Riggs joined Fox Business Network earlier this month as a host after a nine-year run at Bloomberg, where she most recently co-hosted Bloomberg Triple Take and Bloomberg Markets: The Close.

Brenberg, DeAngelis and Riggs will present breaking financial news and analysis each day on The Big Money Show. According to the networl, Brenberg will share his perspective on why he feels free markets are always the solution; DeAngelis will provide viewers with her expertise in energy and commodities; Riggs, the financial journalist, will contribute her background in breaking market news to unpack complex headlines so viewers can make sound financial decisions.

Many of those potential viewers received their introduction to Riggs this past Thursday when she and her co-hosts appeared at the Laurel Diner in Long Beach, N.Y. in advance of the premiere — getting customers’ takes on the state of the economy. 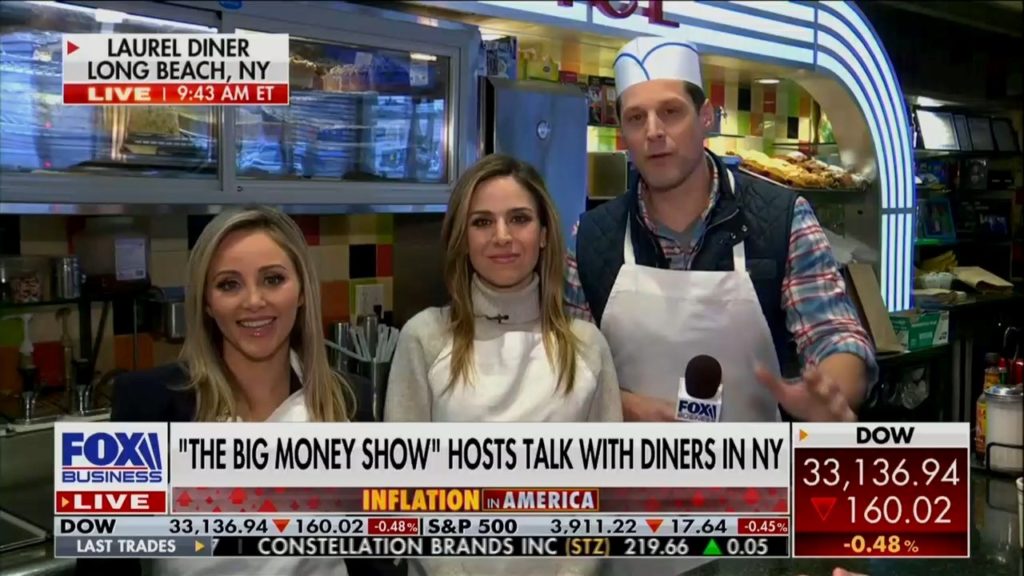 We recently spoke with Riggs about her big move to FBN, how her experience as a CFA and getting her law degree set her apart as a business TV journalist, as well as the issue she’s most eager to dig into during week one.

This Q&A is lightly edited for clarity purposes.

TVNewser: Tell me about The Big Money Show and what your specific role will be on it.

Riggs: When I hear the words, “The Big Money Show” — we’re trying to take all of the big Wall Street big institutional money—that’s sort of my background and where I cut my teeth—and make it accessible to our audience. During 2020, we were all sitting at home, we weren’t allowed to go to the gym, or go outside, we all had our phones, and we all had access to the markets. My whole thing now is about the democratization of finance, and making it accessible for everyone. That’s really my goal. Jackie [DeAngelis] and Brian [Brenberg] are incredible, and I think we’ve all thought a lot about how we take “the big money,” the big Wall Street institutional money and I want to help filter some of those ideas, some advice and interesting conversation to our audience.

What are the biggest takeaways your time at Bloomberg that will help you at FBN?

Bloomberg helped me hone a lot of my financial skills, and I think the pivot for me will be taking away all of those smart ideas and “inside baseball” conversations we were having, and now translate it into a relatable show for our audience. I felt like so often the markets or finance or economics weren’t accessible to everyone. And so how do we [solve] that? I spent those nine years honing those skills, and I’m excited to be able to help share that with our audience.

What does your role as a CFA bring to business TV reporting?

I think you kind of go through that hazing process of the CFA Charter process, and it is all about learning about the fundamentals of that company — how did they bring in revenue? Where did they spend that money? What’s the bottom line? How do they make a profit? How are they generating cash?

We’ll have top stories about some of the biggest companies, the biggest movers in the market, and we’ll be able to look at those companies, see what they’re doing, and then talk to our audience about what’s going on within that company. How are they pulling in revenue? And I also think about the inflation data that we received this morning. How are these companies handling inflation? Do they have the pricing power? Can they raise prices and pass them on to the consumers or not? I feel like with my CFA, I can look through the company’s financials, try to figure that out, and then bring it to our audience so that they all don’t have to do that at work and read the balance sheets. We can do a lot of that for them and also try to have some fun along the way.

How will you use your law degree in business reporting? How will that set you apart?

In my core soul, I’m a naturally curious person and a law degree for me just another spot of curiosity. One thing I love about law school so far, and I’m new to it, I’m certainly not an expert, but it changes the way you think. You think about both sides of the picture, you learn to argue both sides of the data points. You learn about different perspectives, and you have to argue both sides. So for me, law is a good way for me to look at both sides of the story, come to a decision, be persuasive—although that’s more in law and less in journalism—learn how the world ticks and what makes the world go around. Law for me is just another way to fulfill some of the curiosity that I have about the world and some of the other things going on.

Let’s move to the business news of the day. There’s a lot going on right now. President Biden spoke this morning [Thursday, Jan. 12, 2023] about inflation continuing to decline although many experts say we could see a recession later this year. There’s a new Republican majority in Congress and a fierce fight over whether or not to raise the debt ceiling. What issue are you most eager to start digging into?

As reporters, you think you’ll cover one big thing, but you don’t actually think all 10 issues will happen all at once. That’s a hard question because I think there’s certainly a lot going on. What makes the world go round is the money, and I think you’re spot on when you’re talking about CPI [Consumer Price Index], which seems to be the only thing on the Federal Reserve’s mind, and frankly, probably the only thing on a lot of American minds as well. I’m excited to dig into inflation and the Federal Reserve and how raising rates, and as you mentioned, the possibility that there could be a recession, how that impacts all of us. People hear the Federal Reserve is raising rates 25 basis points, and they don’t understand the ramifications it will have on their household payments, their auto loans, mortgage payments, school loans, you name it. I’m really excited to dig into not just the crazy, wonky numbers, but again, how it deeply impact all of that.

You’re a consistent participant in our annual March Madness bracket, but this is your first TVNewser interview and many of our readers are only now getting to know you. What are some of your off-air interests? You’ve participated in 15 marathons, I noticed.

I love to travel. My husband and I will travel any chance we can get. We love exploring and again, it comes back to filling up some of that curiosity I think that’s within all of us.