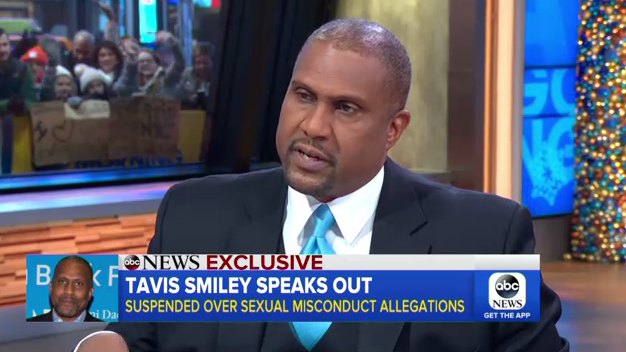 Sponsors like Walmart have severed ties with the longtime talk host in light of the accusations.

Smiley appeared on television today to defend himself against the allegations, telling his side of the story on ABC’s Good Morning America, and Fox News’s Tucker Carlson Tonight.

“PBS made a huge mistake here,” Smiley said during a sit-down with ABC News’s Paula Faris.

He added, “I celebrate and applaud these women who had the courage to come out.” but stated that he’s concerned that because of the recent climate, “people end up being guilty simply by accusations.”

Below is video of Smiley’s appearance on Tucker Carlson Tonight, where during the conversation with Carlson, Smiley warns PBS that if it does not “fix this,” and he sues over network’s decision to suspend distribution of his program, “millions of taxpayer dollars are going to be spent by PBS defending itself…And I don’t think taxpayers want their money spent that way.”

As he did on GMA, Smiley admitted to having romantic relationships with women he has worked with over his 30-year TV career. He also said the relationships were consensual, and “at worst, this was misjudgment.”

While PBS distributed the half-hour weeknight interview program, it’s produced by his own production company TS Media. PBS has been airing the series since 2004, it does not employ Smiley or his staff.