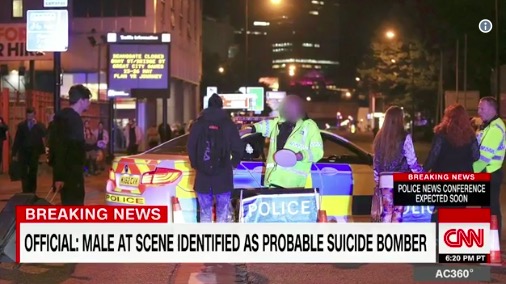 Broadcast and cable news networks have been in continuing coverage of an explosion in Manchester, England outside an arena where an Ariana Grande concert had just concluded. At least 22 people are confirmed dead, and 50 injured. NBC News reports a body found nearby points to this being a suicide attack.

CBS News first reported the story during the first feed of Evening News around 6:43 p.m. ET, with Jonathan Vigliotti reporting from London. Scott Pelley broke in with special reports as well in prime time. CBSN has been live all night.

NBC’s Lester Holt, who anchored from Jerusalem tonight, reported the news at 6:50 p.m., with a network-wide special at 7:30 p.m. ET.

Shepard Smith has been anchoring on both Fox News and special reports on Fox broadcast. Sean Hannity will be on at 10 p.m. and Smith picks back up at 11 p.m. followed by Trace Gallagher at Midnight, then Kelly Wright and Arthel Neville will co-anchor live coverage from 1 a.m. until 4 a.m. ET.

CNN’s Anderson Cooper has been in rolling coverage since 8 p.m ET, while on MSNBC, Chris Hayes and Rachel Maddow have anchored their hours primarily covering this story. Brian Williams will begin anchoring at 10 p.m. as Lawrence O’Donnell is at a preplanned family event in Boston.