NEXT:CNN Presents at WarnerMedia Upfront With Tagline: 'The Truth Has Never Been Easy'
PREVIOUS:Scoreboard: Tuesday, May 14 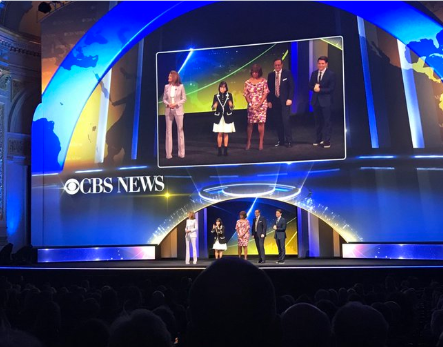 CBS held its upfront this afternoon at Carnegie Hall, and the News division was one of the featured attractions.

48 Hours senior ep-turned CBS News president Susan Zirinsky made her upfront debut today, and talked about “taking a top-down look at the entire organization,” while expressing confidence in the revamp.

“We are running into the future, and we have the right people in the right places,” said Zirinsky. “I can safely say the entire news organization feels energized.”

Susan Zirinsky makes her CBS upfront debut as head of CBS News. “We have the right people in the right places.” pic.twitter.com/kdnMsEsG3W

Zirinsky spoke about the revamped morning show, which kicks off this coming Monday. She first touted the work of Gayle King, saying: “Viewers trust her. People want to open up to her.” She added that King is “a tough interviewer,” citing the now-famous R.Kelly interview as one example. That got some laughter from the room.

“Z” moved on to say a few words about the two new guys on CTM, touting the journalistic “range” of Anthony Mason and the “spark” of Tony Dokoupil.

Zirinsky moved on to the CBS Evening News.

“Now we’re making history. Norah O’Donnell becomes the anchor of the CBS Evening News, the legacy broadcast of the future,” said Zirinsky. “It remains the heart and soul of CBS News.”

Zirinsky went on to tout O’Donnell’s background as a Washington political reporter before diving into the morning show gig. “These past six years, she has anchored every story that has mattered, and Norah has street cred like no other anchor in the business,” Zirinsky proclaimed.

“This fall, she takes the show to its new base: Washington D.C., where she’ll be closer than anyone else to every major decision impacting all Americans today,” Zirinsky added.

New CBS Evening News anchor Norah O’Donnell. “Taking it to Washington is going to be a game-changer.” pic.twitter.com/3vnCFKYucV

King, Mason, Dokoupil, and O’Donnell remained on stage with Zirinsky as she concluded the six-and-a-half-minute segment: “So, take a good look. This is the new CBS News. It’s our time.”

“Take a look. This is the new CBS News. It’s our time,” says Zirinsky. pic.twitter.com/zwatAZGK74