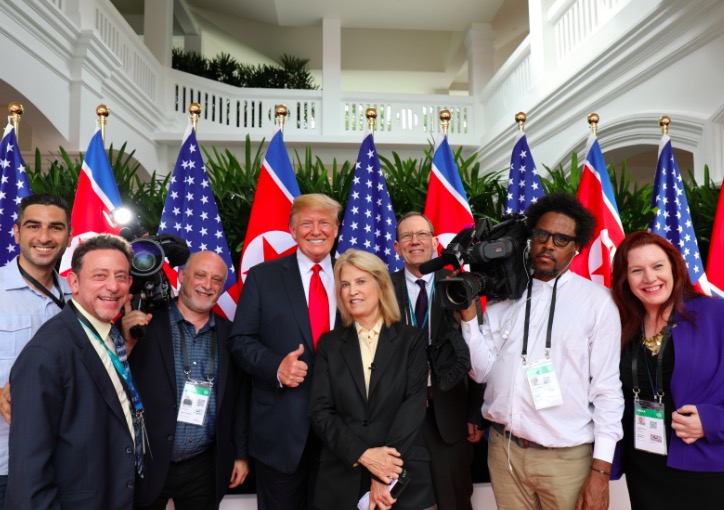 President Trump is on his way home from an historic summit with North Korean dictator Kim Jong Un.

“Surreal is the word for it,” ABC George Stephanopoulos said of the series of meetings held today in Singapore.

CNN’s Jim Acosta was heard throughout the one-on-one meetings asking questions when Kim and Trump walked together in front of cameras, took part in a lunch, and signed that document that calls for complete denuclearization of the Korean peninsula. Acosta asked Kim at one point, “Would you like to come to Washington?”

“Getting a good picture everyone?” Trump joked to the press just as the delegations began that lunch.

Stephanopoulos interviewed Trump just after the signing of the document. His was the first one-one-one. Fox News Channel’s Sean Hannity was second, and Voice of America’s Greta Van Susteren was third with the president. An insider on the ground told us the order was determined by whose crew was ready to go. The news crews’ camera gear all had to be swept and cleared by secret service first. Trump also took part in a one-hour news conference around 4 a.m. ET. Playbook kept a tally of those who got questions, including NBC’s Hallie Jackson, CBS’s Major Garrett, Fox News’ John Roberts, ABC’s Jon Karl and Acosta.

The president continued taking questions for another 25 minutes.