As an increasing number of states instruct their residents to stay home in hopes of combating COVID-19, linear TV viewing is increasing across nearly all dayparts and demos.

According to a VAB study, the most significant increases in linear TV viewing are among younger audiences and daytime television.

According to Adweek’s Jason Lynch, the VAB report compared weekly minutes of TV viewed during the week of March 16—the first week that most Americans began working from home amid the coronavirus spread, which was classified as a pandemic by the World Heath Organization on March 11—with the last week of February, Feb. 24.

The A18-34 demo, popularly known as the millennial demographic, has become increasingly tougher for advertisers to reach on ad-supported TV. However, the demo watched 83 million more hours of TV during that first week of the lockdown than the final week of February.

Daytime TV, weekdays from 9 a.m. to 4 p.m., has received a massive lift from this stay-at-home order. Teens 12-17 who would typically be stuck in middle or high school classes during these hours are spending 175% more time watching in that time frame compared to a month earlier, while adults 18-34 are up 45% and adults 35-49 have jumped 42%.

The VAB found that 72% of all households watched daytime TV during the week of March 16, compared to 64% the week of Feb. 24.

“This finding underscores the point that marketers should not deem any daypart ‘off-limits,’” said VAB evp Danielle DeLauro in a statement. “With every daypart showing increases, now more than ever marketers should be targeting by audience, not daypart. The audience for daytime TV has particularly changed dramatically, now filled with school age kids and younger, working adults.” 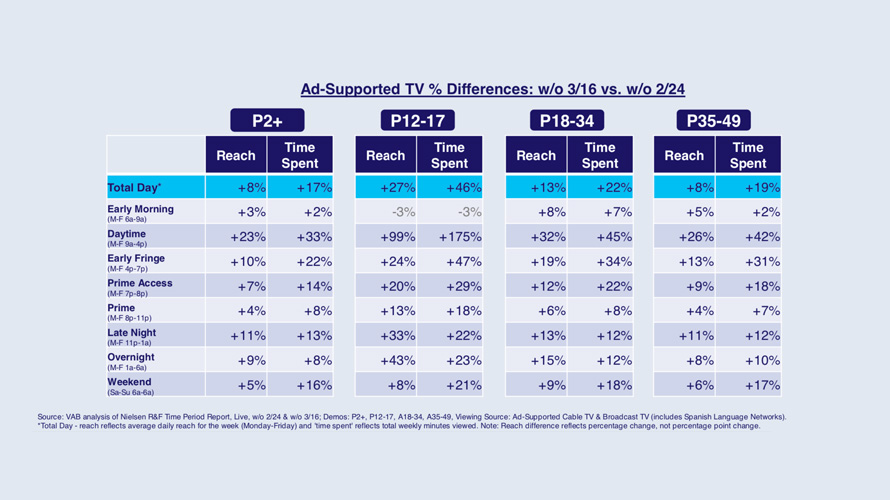