NEXT:Ilyas Kirmani Joins NBC News International
PREVIOUS:Bill O'Reilly on Roger Ailes: 'It Was a Privilege to Know Him' 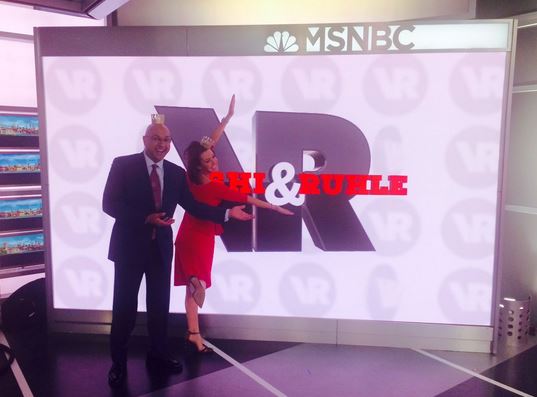 MSNBC weekday anchors Stephanie Ruhle and Ali Velshi both have business news backgrounds: she with Bloomberg and he with the long-lost CNNfn (and later CNN).

With so much news focused on politics and the Trump administration, the two would get together for office chats and talk about stories that didn’t get in their rundowns, stories about the news of the day impacted, and was impacted by, business and the economy. So they went to the MSNBC bosses and pitched their own show. As Forbes’ Mark Joyella reports:

MSNBC management agreed, and Velshi & Ruhle will debut Saturday at 12:30 p.m. ET–a time slot just far enough removed from the tiring pace of political news to allow for something close to the office chats that inspired the show.

The new show, led by executive producer Aaron Volkman, will deliberately avoid the “business show” format. “We’re not running a market show at all, and we’re not doing personal finance,” said Velshi. “It’s this whole category in the middle.”

The Saturday afternoon show joins another business show, Your Business which has been a part of MSNBC’s weekends since 2006.