NEXT:Tuesday, May 26 Scoreboard: Tucker Carlson Was No. 1 in Total Viewers and Adults 25-54
PREVIOUS:Report: Multiple CBS News Journalists Are Being Laid Off 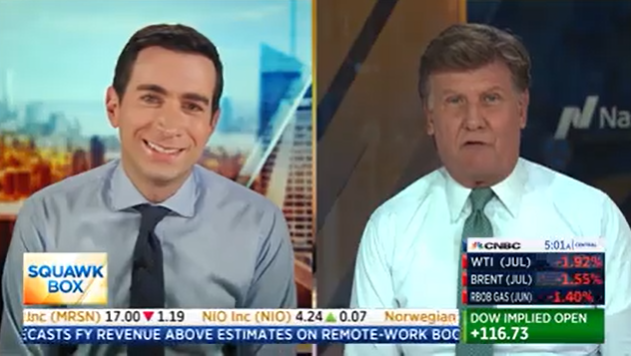 At the top of this morning’s edition of Squawk Box, co-hosts Andrew Ross Sorkin and Joe Kernen addressed yesterday’s on-air argument that ended up going viral.

“Now for the moment we’ve all been waiting for,” said co-anchor Becky Quick—taking out a bowl of popcorn. “Joe and Andrew, I’ll send it over to you.” 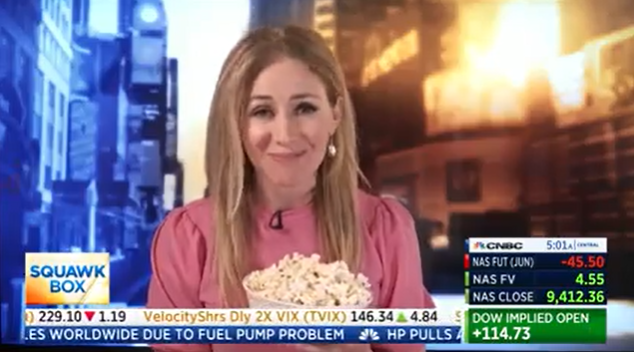 Kernen announced that the two had buried the hatchet off air following Wednesday’s broadcast.

Kernen: We’ve been together 10 years, that’s longer than many marriages. We have our moments. We disagree but not to be disagreeable. That’s one way to look at it; or maybe civility under the debate the entire country finds itself in right now.

Sorkin: Hear, hear! 100%. We are having the conversation that’s happening at everybody’s dinner table. It is a family, and I’m grateful for it. I want to say this to you, Joseph: You have one of the quickest minds in the entire world, and I respect the hell out of it. I learn from you every single morning and I thank you for that.

Kernen: It can be used for good or evil, as we know. Let’s we’ll move on and we will do our best. Is the world stressed? Do we not all have anxiety and concerns? In my long life, I have never seen anything like this, and that’s what we are dealing with as a country, and the Squawk family is dealing with the same thing.

Quick: Good. I’m glad you guys made up. It is like Thanksgiving dinner every morning on Squawk Box, except for no food or alcohol.

In case you missed what transpired: About five minutes into yesterday’s broadcast Kernen accused Sorkin of being overly pessimistic about the market’s recent rally, and wondered aloud why he seemed to be going out of his way to find negative market indicators. Sorkin responded by saying that “a lot of smart people” have been wondering how the market could be so high despite the devastating impact Covid-19 has had on the economy.

“Why is that the smart people?! They’ve been wrong for 35%!” Kernen responded—referring to the gains the Dow has made since reaching its low of 18,213 on March 23. “Why are they smart?! Just because they can see what’s right in front of their nose?! That doesn’t make them smart! It makes them not savvy about the market!”

Sorkin continued, “Hold on! Hold on! Hold on! I’m not going to do this with you, Joe!” Sorkin said. He conceded he doesn’t know whether he’s right or wrong, but that the questions that investors are posing are valid.

The debate basically went off the rails after that, as Kernen referenced a moment from Tuesday’s broadcast in which he said Sorkin yelled, and added, “You just yelled again!”

Kernen went on to outline what he perceives as an overreaction by Sorkin to the Covid-19 pandemic, despite 100,000+ deaths to date.

That statement set Sorkin off.

Kernen described Sorkin’s accusations as “totally unfair,” saying, “I’m just trying to help investors keep their cool, keep their heads and as it turned out that’s what they should have done,” he said.