NEXT:Vice's Global News Chief Jesse Angelo Says the Revamped Viceland Will Be 'an Evolution, Not a Revolution'
PREVIOUS:Scoreboard: Wednesday, Dec. 4 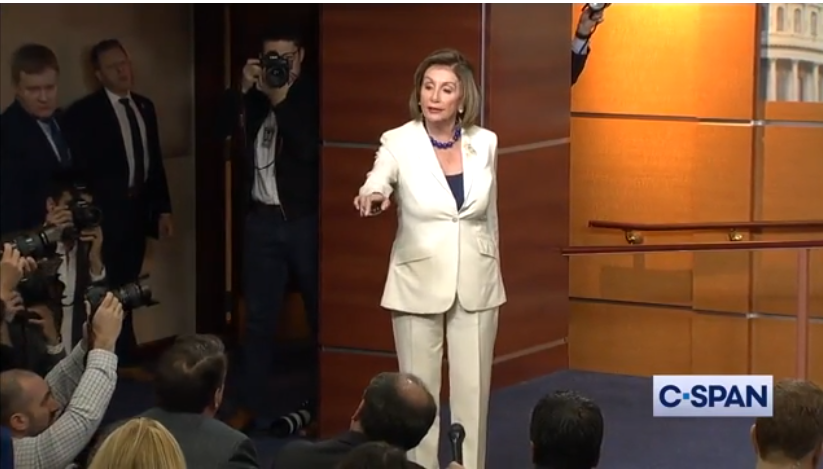 In case you missed it yesterday, House speaker Nancy Pelosi sharply criticized Sinclair reporter James Rosen after he asked the House Speaker during a press conference yesterday if she hates the president.

“Do you hate the president?” Rosen asked.

“I don’t hate anybody,” she said. “Not anybody in the world. Do not accuse me–”

“I did not accuse you, I asked a question,” Rosen said. “Rep. Collins suggested yesterday that the Democrats are doing this simply because they don’t like the guy, I think it is an important point.”

“I think the president is a coward when it comes to helping our kids, who are afraid of gun violence,” Pelosi said. “I think he is cruel when he doesn’t deal with helping our DREAMers, of whom we are very proud. I think he is in denial about the Constitution — about the climate crisis.”

“However, that’s about the election,” she continued. “Take it up in the election. This [impeachment] is about the Constitution of the United States and the facts that lead to the president’s violation of his oath of office. And as a Catholic, I resent your using the word hate in a sentence that addresses me. I don’t hate anyone… I pray for the president all the time. So, don’t mess with me when it comes to words like that.”

This press conference came not long after Speaker Pelosi gave a televised address, announcing that the House of Representatives would be drafting articles of impeachment.

We have reviewed the incident and based on the video, this was clearly not meant to be an inflammatory question and, further, this gave Speaker Pelosi the opportunity to clarify her own views, something that only strengthens positive dialogue.

Again, both Sinclair and James Rosen respect Speaker Pelosi and hope we can continue the dialogue.

Coincidentally, CNN’s Jake Tapper hosted a CNN town hall with Speaker Pelosi last night, and she again criticized Rosen, saying, “Was that a reporter? Was that what reporters do?”

When Tapper said Rosen works for the conservative-leaning Sinclair, Pelosi replied, “Yes, Sinclair; is that a news source?” Pelosi then said she believes the word hate as a “terrible word,” adding, “So for him to say that was really disgusting to me.”

Rosen joined Sinclair as a D.C.-based investigative reporter at the beginning of the year. He arrived at Sinclair more than a year after he suddenly exited Fox News. Rosen called Fox News home from 1999-2017.

NPR’s David Folkenflik had spoken with 8 of Rosen’s former colleagues at the time of his departure from FNC, all of whom claimed Rosen “had an established pattern of flirting aggressively with many peers and had made sexual advances toward three female Fox News journalists.”

These harassment claims were undoubtedly the reason for Rosen’s departure from FNC.

Rosen also has a not-so-great history with the Democratic party. In 2013, it was revealed the Obama Justice Department had been investigating Rosen in a leak probe. Fox News executives at the time referred to the investigation “downright chilling.”