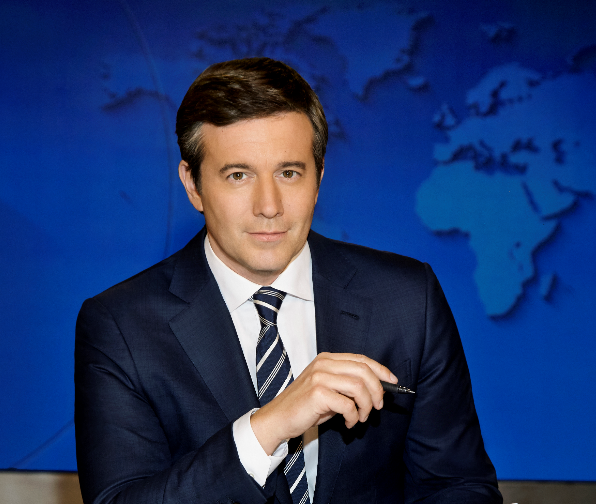 What seems to have been lost in the news about CBS News this morning is the future of Jeff Glor. The current Evening News anchor is en route back to New York after a weekend at the Grand Canyon for a story on the 100th anniversary of the iconic national park.

It appears he also was able to bring his family along for the ride.

A source tells TVNewser that Glor will be addressing his Evening News colleagues this afternoon about the staffing changes that were announced this morning, and that he will anchor the newscast this evening. Whether he anchors the newscast on Tuesday and beyond remains to be seen.

Then-CBS News president David Rhodes named Glor anchor of the evening newscast in late 2017, and his first broadcast as anchor on a permanent basis was December 4 2017.

He had previously anchored CBS’ The Early Show, and the weekend edition of the Evening News, and had also reported for CBS Sunday Morning, Showtime’s 60 Minutes Sports, and occasionally filled in on CBS This Morning.

Glor was the original anchor for CBS News’s streaming service CBSN when it launched in November 2014.

Glor anchored countless special reports over his 18 months on the job, and took the broadcast out of the studio on many occasions. He led CBS News coverage from Vietnam for the U.S.-North Korea Summit back in February, and reported from Israel in May of last year. There was his exclusive sit-down with VP Pence after the 2019 State of the Union, and his June 2018 interview with President Trump from his golf course in Scotland, where POTUS told him that he held Vladimir Putin “personally responsible” for meddling in the 2016 presidential election.

GLOR: You say you agree with U.S. intelligence that Russia meddled in the election in 2016.

TRUMP: Yeah and I’ve said that before, Jeff. I have said that numerous times before, and I would say that is true, yeah.

GLOR: But you haven’t condemned Putin, specifically. Do you hold him personally responsible?

TRUMP: Well, I would, because he’s in charge of the country. Just like I consider myself to be responsible for things that happen in this country. So certainly as the leader of a country you would have to hold him responsible, yes.

As mentioned earlier today, Norah O’Donnell has been named the 8th anchor in the history of the CBS Evening News, and will begin her tenure this summer. The newscast will originate from Washington DC.

Her CBS This Morning colleague John Dickerson moves to 60 Minutes as a correspondent, while Gayle King becomes the de-facto centerpiece of CBS This Morning and will be joined by CBS News’ Anthony Mason and Tony Dokoupil as co-hosts on the broadcast.

At the end of the day, a lot of this comes down to ratings. Not only are CTM and the CBS Evening News ranked third in their respective genres, but they experienced a steeper year-over-year decline in viewership than their ABC and NBC competition.

Can these anchor changes jump-start CBS News? We shall see.