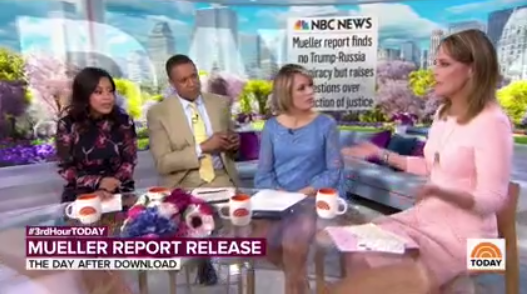 There have been mixed responses to the media coverage of the public, redacted Special Counsel Mueller report. Just surf Twitter and you’ll find out for yourself.

For example, on one side, there is conservative radio host Mark Levin, who also hosts the Fox News series Life, Liberty and Levin on weekends. He was not pleased when discussion having to do with obstruction arose. He made his displeasure known during an appearance on Fox & Friends this morning.

.@marklevinshow reacts to #MuellerReport and negative media coverage of @realDonaldTrump it has generated.

“This isn’t a free press. This isn’t serious … They are destroying the attorney general of the United States, because they destroy ANYBODY who stands up to the mob.” pic.twitter.com/9wCI30yPec

On the other side, Today Show co-host Savannah Guthrie stopped by Today’s 9 a.m. hour, and gave kudos to her fellow TV newsers, especially those from her own network for how they handled yesterday’s released of the report.

Lester [Holt] and I were doing our coverage, and I think we have you know, the greatest team of correspondents and analysts. But I can’t imagine that we will ever do anything harder than that. I mean, I remember watching as a viewer; I was in law school, Bush v. Gore, seeing Pete Williams out in front of the Supreme Court reading a decision live. I thought that has to be as hard as it could possibly be. This was harder because the sheer volume. Obviously, the substance of the report is incredibly complicated…