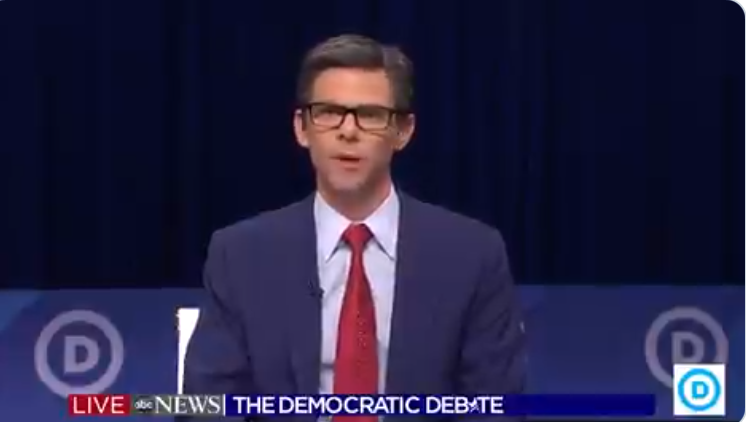 He then quipped: “Let’s meet our future MSNBC contributors.”

First up was Joe Biden, being played by Jason Sudekis, who finished in fourth place in the Iowa caucuses:

“Well, you know, I’ll be honest. Losing Iowa was a real kick in the nuts,” Biden said. “I’m not worried at all. Because by the time we get to South Kakalakie, Joe Biden is going to do what Joe Biden does the best, creep up from behind. Just when you think your lead is safe, my numbers are going to come up and surprise you with a nice, sweet kiss on the neck.”

Bernie Sanders, once again being played by Larry David (thankfully), went off about the Iowa vote count disaster.

“I can’t believe all this mess happened in Iowa because of an app. Hey, I have an idea for an app, it’s called no apps!” yelled Sanders. “No apps, no computers, no gadgets, no gizmos. You show up to your polling place, take a number like you do at the butcher, they call your ticket, you walk up to the counter and say to the guy, ‘Give me a pound of whatever’s about to go bad.’”

“Oh, the issue in Iowa was math, I wonder who they could have equaled to help them out with that?” Yang asked sarcastically while tugging on his jacket lapel adorned with a “MATH” pin. “Oh what, I meant because of my skin, racist.”

“I don’t want to talk about Iowa anymore, let’s talk about the here and now, all right?” said Elizabeth Warren, being played by SNL’s Kate McKinnon. “I’m very confident about my chances in New Hampshire. I tend to really connect with New England moms who own big dogs and rock a sleep vest out of the seven days a week. New Hampshire, your state border may be kissing Vermont, but your ass is resting on Massachusetts, so come on over and sit on my lap!”

” I just want to add that Senator Warren is not the only sensible candidate standing here before you,” Klobuchar explained. “You are looking at the other half of the New York Times endorsement. But guess what, Elizabeth is J. Lo and I’m Shakira, and, so, to Donald Trump I say,” and then she did the “zaghrouta” tongue warble that Shakira performed at the Super Bowl halftime show.

Then, it was Tom Steyer, being played by SNL’s Pete Davidson.

“I have my hand up now, I would like to talk please. Notice me, thank you,” Steyer said. “I just want to say that I love everybody here. I mean, I agree with all of them, everybody, all of you. I’m sorry, I’m tripping balls right now.”

Stephanopoluos then announced that the sponsor of the night was … Bloomberg. Former SNL star Fred Armisen then appeared in prerecorded footage as Michael Bloomberg sipping a Big Gulp soda.

“OK, this is my favorite part of the debate,” said ABC News correspondent/moderator (and newly named ABC News Live anchor) Linsey Davis (being portrayed by SNL’s Ego Nwodim). “Here we ask about winning the black vote. I’m going to start with you, Mayor Pete.”

“Oh, man,” said Pete Buttigieg (played by Weekend Update’s Colin Jost). “Look, people say I’m not very popular among minorities. They’ve been referring to me as ‘Mayo Pete.’ But I assure you I’m not that spicy.”

After the other candidates offered their closing statements, the moderators turned back to Biden.

“What? No, the doctor said I have six to eight months,” an alarmed Biden answered.

“No, I meant for your closing statement.”

“Oh, OK. All right, I guess there’s only one thing left to say. … Live from New York, it’s Saturday Night!”