NEXT:Lester Holt Will Moderate a Live Town Hall With Joe Biden on Monday, Oct. 5
PREVIOUS:Tamron Hall on Changing Executive Producers: 'To Become a Success ... You Have to Grow' 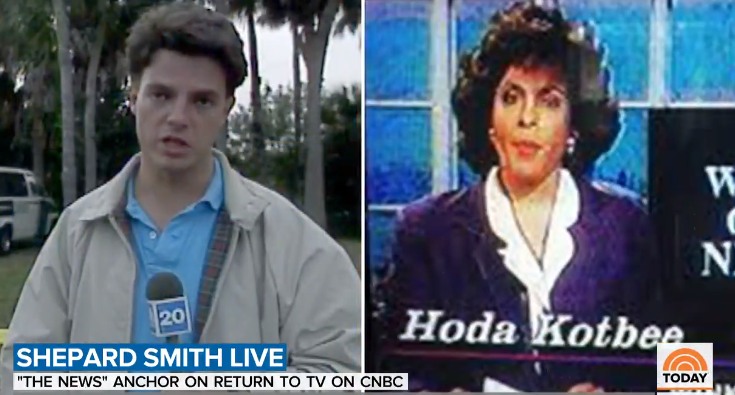 During a hit promoting tonight’s launch of his CNBC newscast, The News With Shepard Smith, the former Fox News anchor and Today co-host Hoda Kotb took a walk down memory lane (with the help of some Today show producers) to their local news days.

In the late 1980s, Smith and Kotb were both reporters for competing stations in the Fort Myers, Fla., market, primarily covering crime. Smith reminded Savannah Guthrie and the Today show audience that he was with the NBC affiliate (WBBH-TV), while Kotb (who dropped the extra e’s on her name in the early 2000s) was with the CBS affiliate (WINK-TV). “So at least I knew what I was doing,” Smith quipped, setting off audible laughs in the Today show studio.

The two were competitors back then, but respected one another’s reporting, and knew exactly when the other was on a big story. In fact, their respective news directors called them out if one failed to beat the other.

Shepard Smith and @hodakotb once competed in the same local news market in the 1980s 📺 pic.twitter.com/zGfECtuF1q

The News With Shepard Smith launches tonight at 7 p.m. ET on CNBC.