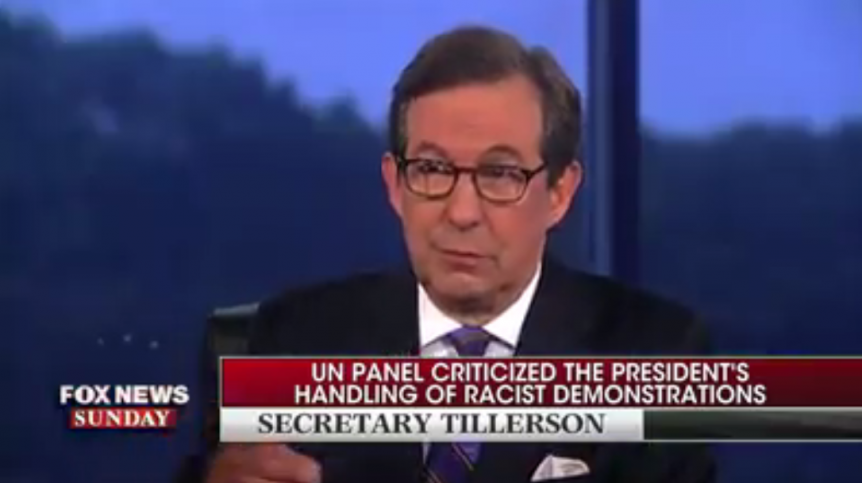 Chris Wallace sat down for an exclusive interview with Secretary of State Rex Tillerson this past week on Fox News Sunday. Topics of discussion included Hurricane Harvey, and Tillerson’s thoughts on how Texas governor Greg Abbott has been reacting to the tragedy. Tillerson is a native Texan. The two also discussed North Korea and Afghanistan.

But perhaps the most notable news to come out of the interview was during a back-and-forth about the president’s response to Charlottesville.

Wallace: Does that [the president’s delayed response to Charlottesville] make it harder for you to push American values around the world when some foreign leaders question the president’s values?

Wallace: And when the president gets into the kind of controversy he does, and the U.N. committee responds that way it does, it seems to say that they begin to doubt whether we are living those values.

Wallace: And the president’s values?

Tillerson: The president speaks for himself, Chris.

There was then a brief, yet deafening silence after this answer and before Wallace’s followup.

The president’s cabinet secretaries rarely criticize him on television, and Wallace rarely has to pause before a followup. The host was stunned.

Wallace: Are you separating yourself from that, sir?

Tillerson: I’ve spoken, I’ve made my own comments as to our values as well in a speech I gave to the State Department this past week.