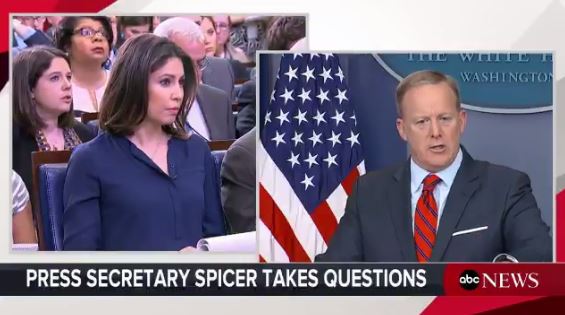 Of course, he did, first gassing citizens deemed “unworthy of life,” then the mass murder of millions of Jews in killing centers and concentration camps equipped with gas chambers.

11 minutes later–after Spicer’s comments blew up on Twitter–ABC’s Cecilia Vega asked, “I want to give you an opportunity to clarify something.”

But Spicer only made it worse, saying Hitler “was not using the gas on his own people,” and calling the gas chambers, which Hitler used to kill millions of Jews, including Germans, “holocaust center.” WATCH:

Asked to clarify comment that Hitler didn't use chemical weapons, @PressSec says, "He was not using the gas on his own people" as Assad did. pic.twitter.com/K0CQPha1x9

A further clarification from Spicer:

This doesn't really answer the question as to why doing it from a plane is worse than building gas chambers in death camps, of course.

Actually, two statements of clarification, according to CNN’s Jim Acosta: