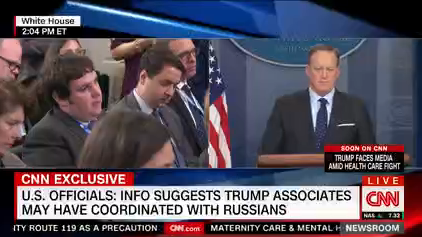 CNN’s Pamela Brown, Evan Perez, Shimon Prokupecz and Jim Sciutto reported last night that the FBI has information indicating that associates of Pres. Trump may have communicated with suspected Russian operatives to coordinate the release of information which intended to hurt Hillary Clinton‘s presidential campaign.

A reporter asked Sean Spicer if he wanted to comment on CNN’s reporting. He did:

“So, let’s actually look at what CNN reported. They reported that anonymous U.S. officials had told them that information indicates that associates of the campaign and suspected operatives coordinated, which they admit is not conclusive evidence bordering on collusion.”

He continued: “The last line of the thing said: ‘The FBI cannot yet prove that collusion took place.’

I think there’s probably more evidence that CNN colluded with the Clinton campaign to give her debate questions than the Trump campaign gave any kind of collusion,” said Spicer referring to former CNN contributor and former DNC acting chairwoman Donna Brazille who admitted last week that she’d shared town hall topics with the campaign.

“So, I think when it comes down to that reporting, it is filled with a bunch of subjective terms about this person may have done this, possibly could have done that, and at the end of the story if you wait to the very bottom, it says ‘The FBI could not yet prove that collusion took place.’ So I have addressed this type of reporting in the past and this fits right in.”