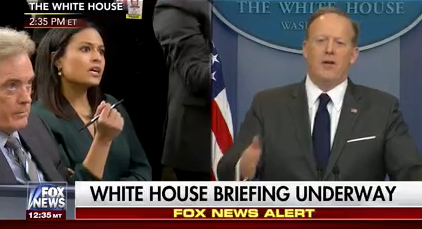 That led some to wonder if the president had inside information on what host Jeanine Pirro was going to talk about. As it turns out, she led her show calling for Speaker of the House Paul Ryan to step down.

“Let me ask you about this tweet over the weekend…does the president regret tweeting to his followers that they should tune in to Judge Jeanine, only to tune in and then hear her call for Speaker Ryan to step down?” Welker asked.

“He’s a fan of the show, plain and simple,” Spicer told Welker. But Welker pressed on, asking Spicer if he believes the president owes Ryan an apology.

“He and Speaker Ryan talked extensively over the weekend, I think they talked both Saturday and Sunday at length,” said Spicer. “But again, he is a fan of the show. He tweeted out support of it. That’s it, plain and simple.”

“What should he should he apologize for? Supporting a show on Fox?” Spicer said, as he moved on to a different question.

Trump has been known to tweet in advance of an appearance on a news program, particularly one on Fox News. But he wasn’t on Pirro’s show Saturday night.

“Paul Ryan needs to step down as speaker of the House,” said Pirro at the start of her show, which is consistently the most-watched show on cable news on Saturdays. “The reason? He failed to deliver the votes on his health care bill.”