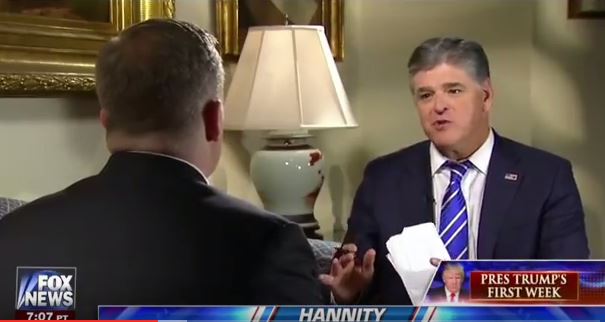 Sean Spicer will sit down with Sean Hannity for his first post-resignation interview. The interview will air on Hannity’s show tonight. Hannity will also interview incoming White House Communications Director Anthony Scaramucci, whose hiring is the reason Spicer is quitting, as well as chief of staff Reince Priebus.

Less than two hours after news broke that Spicer was quitting his job as White House Press Secretary, Spicer used the @PressSec twitter account to announce that he was staying through August.

It’s been an honor & a privilege to serve @POTUS @realDonaldTrump & this amazing country. I will continue my service through August

UPDATE: Fox News is now saying that Scaramucci will not appear on Hannity this evening.