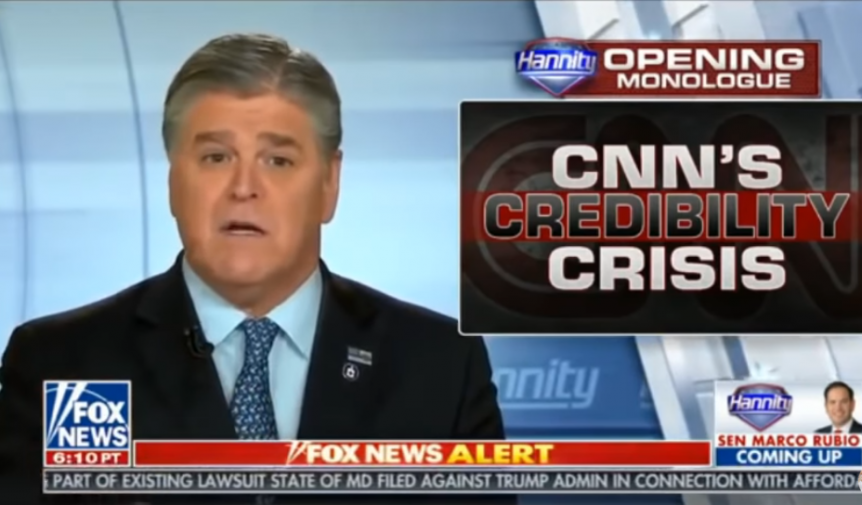 Fox News president Jay Wallace showed support for CNN’s lawsuit yesterday via a public statement and filing of an amicus, “friend of the court” brief. But the network’s top-rated opinion hosts don’t seem to share the opinion of their boss. Sean Hannity, in particular, made his feelings known about Jim Acosta and the CNN lawsuit on his show the previous night.

Hannity – who was criticized last week for appearing on stage with the president during his final campaign stop before the mid-terms – used a chunk of his opening monologue on Tuesday to go after Acosta and his employer, referring to the CNN chief White House correspondent as a “far-left, grandstanding, sycophant left-winger capitalizing on his blatant anti-Trump bias,” and “a fame seeking reporter.”

Acosta has been a journalist for more than two decades and is widely respected for his diligence and independence.

“That’s the biggest lie,” remarked Hannity. “Jim Acosta is a lot of things, but he is not a fair, balanced, independent journalist.”

“For eight long years they just worshiped Barack Obama,” Hannity said of CNN. “Now, CNN claims to be ‘facts first,’ but in reality, they put their hatred for Donald Trump before anything else every second, every minute, every hour, every day, pretty much.”

Hannity then introduced a mashup of Acosta’s post-press conference hits where he criticizes President Trump, contrasted with his reporting from Obama’s 2013 Inauguration parade, telling  Wolf Blitzer at one point, “I feel like I should pinch myself right now, Wolf. I can’t believe I have this vantage point for history in the making.”

Judge Timothy Kelly is expected to hand down a ruling at 3 p.m. ET today in federal court on CNN’s request for a temporary restraining order in order to reinstate Acosta’s White House press access.

We’ll keep our eyes on that.