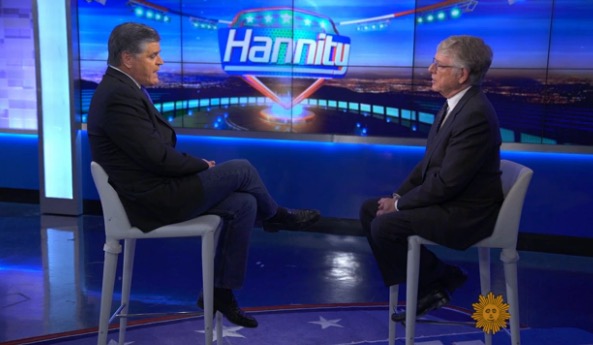 In a story about political partisanship in the country, CBS Sunday Morning contributor and former Nightline host Ted Koppel interviewed Fox News host Sean Hannity. And now Hannity is firing back, upset that “less than two” minutes of the interview was used.

“Why did Ted cut out my many examples of media bias?,” Hannity asked on Twitter. He’s also asking CBS News release the entire 45 minute interview “so people can see the BS games you play in the edit room. I dare you!”

Koppel’s story wasn’t a profile of Hannity, but rather how Hannity’s show, and those like it, exacerbate the divide, which led to a contentious moment:

Koppel: Yeah. Yeah. In the long haul I think you, and all these opinion shows…

Hannity: You do? Really? That’s sad.

Koppel: …because you’re very good at what you do and because you have attracted a significantly more influential…

Hannity: You are selling the American people short.

Koppel: Let me finish the sentence before you do that.

Hannity: I’m listening. With all due respect. Take the floor.

Koppel: You have attracted people who are determined that ideology is more important than facts.