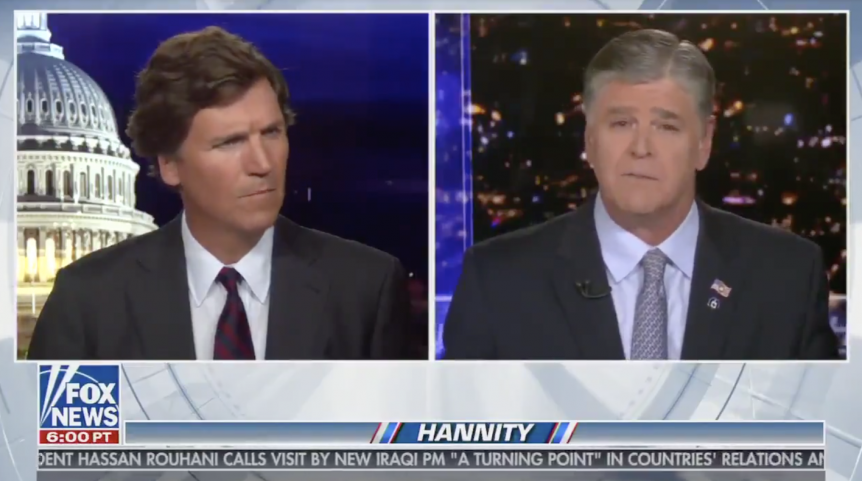 When one prime-time cable news host hands his or her show off to another host at the conclusion of the hour, oftentimes a couple of jokes and a compliment about the program are made, and then the next host begins his or her show.

Tucker Carlson, whose broadcast leads into Hannity, opened the final segment of his 8 p.m. hour stating the coronavirus shutdowns “indisputably crushed huge parts of the American economy” and now millions of Americans are out of work, before singling out one person who “has become extremely rich, richer than any man in history, from all of this, including a lot of the suffering.”

Carlson was referring to Amazon founder and CEO Jeff Bezos.

Carlson went off on Bezos after reporting that he made $13 billion in one day. Carlson then claimed if that happened years ago, “the Democratic Party would have something to say about it.”

During the segment, Carlson said to his guest Chadwick Moore, “I’m not against wealth accumulation, I’m not against free enterprise, but $13 billion in a day suggests something is skewed with the system, no?”

Moore responded, the program ended, and Carlson handed off to Sean Hannity.

But that handoff was a shaky one, with Hannity having listened to the end of their conversation and voicing his disagreement.

And with that the next hour began.

But Carlson seemed visibly shocked by Hannity’s response, and as with most things having to do with these two men, this got some play on social media.

Hannity addressed the situation via Twitter later that night.

I was very clear I support capitalism. If someone is honestly providing goods and services people want, need, and desire I’m fine with that. If they capitalize on tragedy, that’s a different issue and I was very clear. I’ve seen no evidence of that. But if I do, watch out.

I was reiterating Tucker’s point on NOT being versus capitalism. I was in the chair one minute before airtime and I was specifically responding to the end of Tucker’s interview when he said he supported honest capitalism, I had not heard any of the other part of the interview.

Hannity then apologized to Carlson and the Fox audience for “any misunderstanding.”

I apologize for any misunderstanding to Tucker and the fox audience. I support freedom and Capitalism. Not people taking advantage of a pandemic. If I see such evidence I will obviously condemn it.