NEXT:Top Cable News Shows of 2021: Tucker Carlson Tonight Is No. 1 in All Measurements For First Time Ever
PREVIOUS:Friday, Dec. 31 Scoreboard: CNN New Year's Eve with Anderson Cooper and Andy Cohen Is No. 1 on Cable News In Time Period 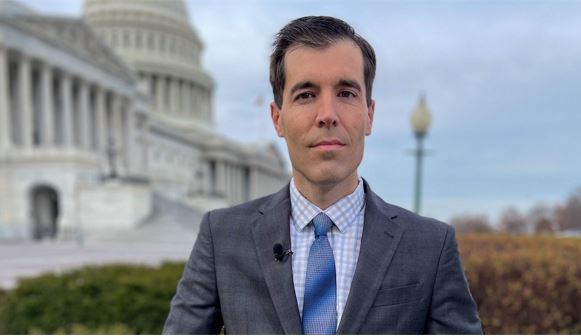 Scott MacFarlane has been named congressional correspondent for CBS News. In this role, he will join the CBS News Washington bureau and report for all CBS News broadcasts and platforms.

MacFarlane has been a Washington-based reporter for NBC’s D.C. station WRC-TV for eight years and has covered D.C. and the federal government for nearly 20 years. He covered the Jan. 6 insurrection and has interviewed presidents, dozens of senators, governors and public officials. MacFarlane’s investigations on public school security and his reporting on various child safety issues—as well as his reporting on thoroughbred horse racing deaths in West Virginia—gained national recognition.

“Scott has a proven track record of impactful reporting,” president and co-head of CBS News and Stations, Neeraj Khemlani, said in a statement. “We’re thrilled he’s joining the CBS News Washington bureau and its top-tier correspondents, guiding viewers on every platform on how Washington developments affect their lives.”

MacFarlane’s investigative multi-part series on teacher licensing loopholes and child sexual abuse allegations led to the creation of five new state laws on school safety, triggered Congressional hearings and earned him the Anna Quindlen Award for Excellence in Journalism. His investigations of the VA inspired a congressional review by the House Oversight Committee, which cited his news reports during a June 2019 hearing’s opening and closing statements.

MacFarlane has been honored with a combined 20+ regional Emmy and Edward R. Murrow Awards throughout his career.

Prior to his role as investigative and political reporter for NBC’s D.C. station, he was a Washington correspondent for Cox Media Group, a guest host on SiriusXM’s POTUS channel; and spent time at CBS as a reporter for CBS’ Detroit station (WWJ-TV) and as a freelance reporter for CBS News Radio.