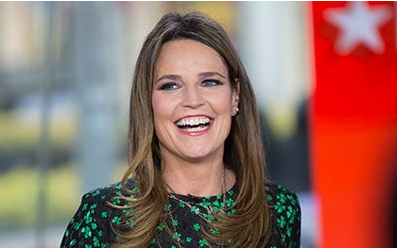 “The Olympics is the highlight of working at the Today Show and working at NBC,” Guthrie remarked at an in-person NBC Olympics’ preview presentation on Wednesday. “This is going to be epic, and I really do think it’s going to be meaningful, the whole world getting together.”

During the Games of the XXXII Olympiad in Tokyo this month, Guthrie will co-anchor Today from the outdoor set overlooking Tokyo’s iconic Rainbow Bridge. Previously, she anchored the morning show from the London, Sochi and PyeongChang Olympics.

This will be Guthrie’s first Opening Ceremony for NBC Olympics.

“There’s nothing that matches this spectacle,” said Guthrie. “I’m thrilled to be joining my friend Mike Tirico and witnessing this magnificent moment with the world.”

Tirico added: “The Opening Ceremony is a memorable part of any Olympic Games, but perhaps it has never carried more meaning given the circumstances the world has been facing. I am thrilled to be co-hosting with Savannah, who is the perfect teammate to help us navigate and celebrate this event.”

Is there a specific nation Guthrie wants to introduce? Indeed, there is.

Out of the 206 countries and territories represented, Guthrie said she told Tirico that she wants to introduce Switzerland.