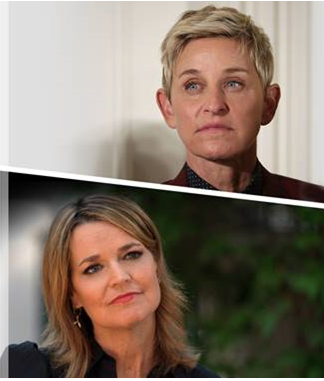 It’s a busy 24 hours for the versatile Savannah Guthrie. The Today show co-host spoke with congresswoman Liz Cheney in D.C. after she was ousted from Republican party leadership. That interview will air Thursday on Today.

Now, she’s heading to Los Angeles to speak with Ellen DeGeneres this afternoon for the first TV interview since she announced in an interview with The Hollywood Reporter that after 19 years she is leaving her syndicated daytime talk show next year.

This afternoon’s sit-down will air also Thursday on Today.

NBC confirms: Ellen Degeneres is leaving her talk show. Sitting down for exclusive intvw with @TheEllenShow this aftenoon.
On my way DC —> LA —> NYC. Airs tomorrow on @TODAYshow

Adweek’s Kelsey Sutton writes: “DeGeneres, who has been a staple of broadcast television for decades and the recipient of Adweek’s 2018 Adweek Media Visionary award, will end her 19-season run at the conclusion of a three-year extension with Warner Bros. to continue hosting the show through 2022, which she signed in 2019.”

DeGeneres has become an NBC staple. Her long-running talk show airs on NBC Owned Television Stations, and she hosts and produces Ellen’s Game of Games on NBC. Perhaps this provided NBC News and Guthrie a leg up on the competition in terms of getting an interview with DeGeneres.

Her imminent departure comes amid behind-the-scenes controversies at her talk show. Last summer, the workplace at the show, which has run for more than 3,000 episodes at a 180-episode-a-year pace, was the subject of a BuzzFeed story that alleged a toxic workplace where racism, fear and intimidation were par for the course. That exposé prompted an internal investigation and led to the departures of three of the show’s producers.

DeGeneres told THR that last summer’s controversy did not influence her decision to leave, and she had decided in 2019 that she would exit at the conclusion of that new 3-year deal. “If I was quitting the show because of that, I wouldn’t have come back this season,” she said.