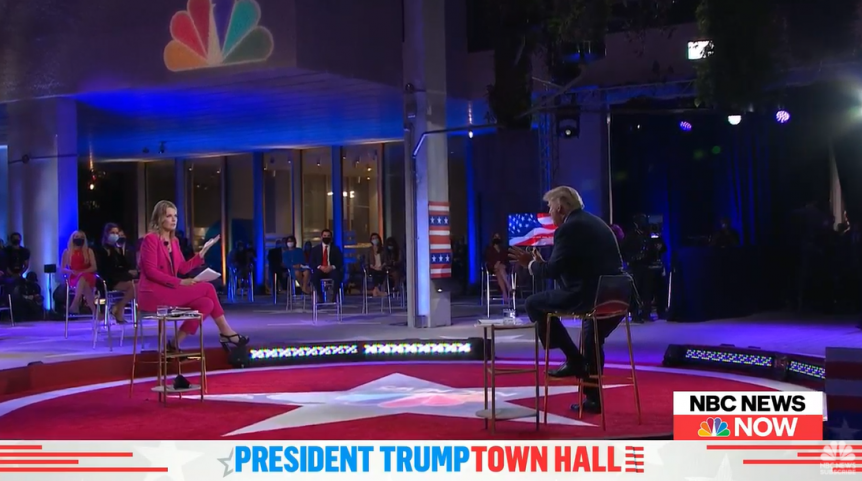 NBC News has been receiving widespread criticism over the past couple of days for scheduling its town hall with President Trump directly against ABC News’ town hall with Joe Biden, an event that had been scheduled for the same date and time days earlier.

Savannah Guthrie‘s dogged questioning and fact-checking of the president at this evening’s event seems to have earned back some good press for the network.

The first 20 minutes of the NBC-Trump town hall featured Guthrie grilling the president on whether he had been tested for the coronavirus on the day of the first debate (he said he couldn’t remember), why he did not promote mask-wearing (Trump falsely claimed that 85% of people who wear masks catch the virus), whether he would disavow the conspiracy theory movement QAnon (he declined to), and was asked about spreading the conspiracy that President Obama had SEAL Team 6 killed. “That was a retweet! People can decide for themselves!” Trump said. “You’re the president, you’re not someone’s crazy uncle,” Guthrie replied, making for a viral moment.

Guthrie has received positive reviews from many fellow journalists for her questions and quick follow-ups.

Under skilled questioning from Guthrie, Trump just said NYT’s tax numbers were “wrong” and then, for first time, admits NYT’s $400M is correct by repeatedly calling it “a tiny percentage” and “very small amount” of his net worth.

Sharp, tough questioning by @SavannahGuthrie, who is smartly following up to pin Trump down when he responds with vague or rambling answers.

what’s clear from the NBC town hall is @SavannahGuthrie is the toughest moderator/interviewer that the President Trump has faced for sometime.

I like how @SavannahGuthrie is taking hold of this discussion. #powersuit

For my friends who didn’t watch Trump, i had to, @SavannahGuthrie spoke for all of us early in the town hall when she said. -but you’re the President of the United States not somebodies crazy Uncle. That’s all you need to know.

Who has taken on Trump better than Savannah Guthrie?

.@SavannahGuthrie is having a strong night. #TownHall

But not everyone was pleased about what had transpired over that hour, most notably Rachel Maddow.

Here she is, welcoming her viewers, many of whom probably declined to watch the town hall in the first place:

.@maddow kicks off her program tonight holding nothing back:

“Well that happened. Let me remind you that what you just saw was a production of NBC news. We are MSNBC. We did not produce that event.”