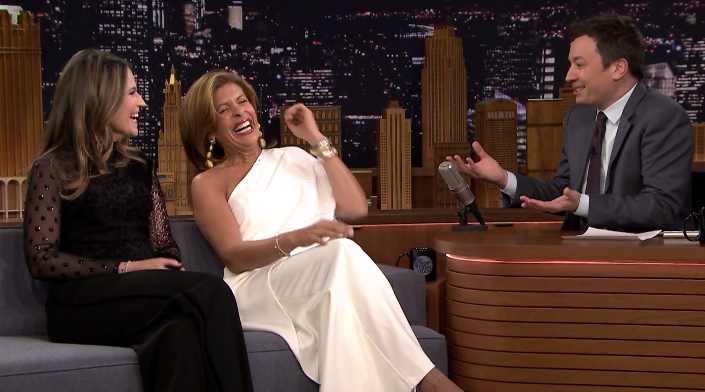 On the Tonight Show, Jimmy Fallon is often the one having to drive the conversation and bring the energy to the interview. With Today co-anchors Savannah Guthrie and Hoda Kotb on the couch last night, that wasn’t necessary. At all.

The new queens of morning television made an appearance on NBC late night, and discussed a variety of subjects.

“Savannah and I just started anchoring together, and it was almost weird … if you have ever met a friend, had a great moment, and said to yourself: ‘Wow, that was so much fun, and that works,'” said Kotb. “I think we had an instant connection.”

“Hoda told me the first day felt like a first date, and I said, ‘Well, I’m easy and desperate … “Guthrie quipped. “It just clicked, felt so good, and we’re so happy.”

Fallon transitioned to the elephant in the room, saying, “You made a positive into what had been a negative situation.”

“It was a difficult time for the show, no question,” said Kotb. “We have been talking about how you navigate those waters.”

“It was hard, everyone saw it, and we all went through it,” said Guthrie. “But as you said, we think something lovely and really positive has happened, and we’re really focused, we have the best staff, who are great and working their hearts out.”

Kotb later told an amusing story about her early days in local news. One night, she subbed in for a station’s lead news anchor, and proceeded to introduce herself as that anchor … on live TV.

They wrapped up by plugging NBC’s Winter Olympics coverage next month from South Korea. Guthrie and Kotb once again will be on-site.

“The thing about the Olympics is that there’s no other thing on Earth where you can sit there and watch a kid you have never heard of before, and in that instant you get to watch their life change,” said Kotb. “You get to see a moment that turns them from a person you have never heard of, into a legend. Think about how many times you get to see a person’s life change in a single moment? It’s going to be so cool.”

“I have to say, being there and hearing your national anthem play when we win gold … it’s really a proud moment and a great time,” added Guthrie.