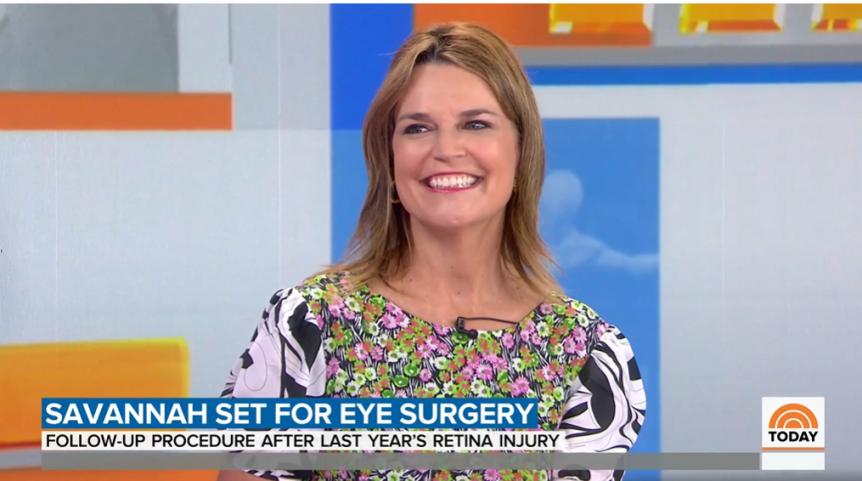 Today show co-anchor Savannah Guthrie will be absent from the NBC morning tomorrow, and perhaps longer.

The NBC anchor left the show a little early to have cataract surgery on her right eye to help repair a blurry spot that has remained since she had a retina procedure in December. Guthrie injured her eye when her 3-year-old son Charley accidentally smacked her with a toy train last fall.

Guthrie had to put off the surgery due to the pandemic, but now she is looking forward to improved vision in her right eye.

“It’s been a long time, I’m super excited,” Savannah said on Today. “I feel like it’s Christmas morning because if they remove this cataract, I’ll really be able to see, and I’ve had a hard time seeing.”

If everything goes as planned during the surgery, which is slated to take roughly 30 minutes, Guthrie should be on her way to better vision.

“It’s kind of distorted and then it’s got a wavy thing, and now I have this cataract, which is a big blurry spot,” she said. “Once they remove that blur, I think it will be a lot better.”

Guthrie hopes to be back on the broadcast later this week.

“Hopefully next time I see you I’ll really see you!” she said.

She and her Today co-host Hoda Kotb appeared on Ellen DeGeneres’ show last month, and told the host of her eye, “It’s getting better. The surgery worked. A lot of people get complications, and I did, too, so I have to have cataract surgery, but I can’t have it until all this has passed.”

Savannah added, “It’s kind of funny, kind of not. I see, but I see big, blurry spots.”

She also spoke with People in April, explaining that she may never fully recover the vision in her right eye.

“I don’t think my eye will ever be the way it once was, but I think it will be much improved,” she said.