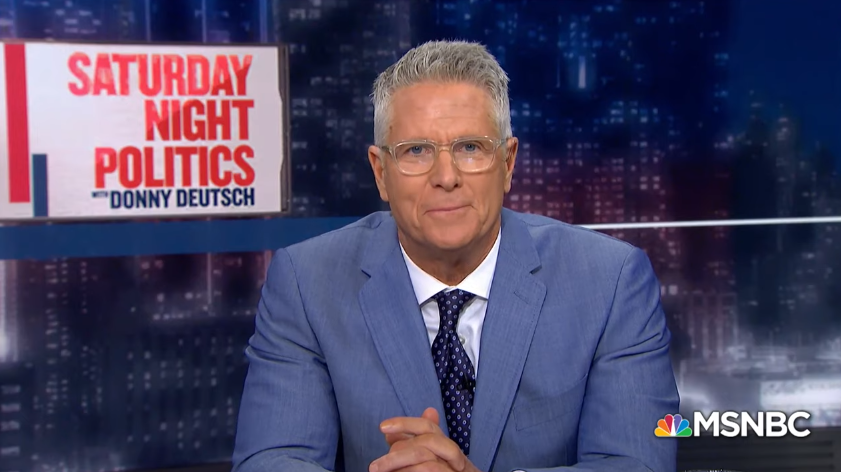 Saturday Night Politics with Donny Deutsch is done on MSNBC.

The show aired for the final time on August 17, after only 13 original episodes.

Saturday Night Politics launched on May 4 in the network’s 8 p.m. hour, and was originally billed as part of MSNBC’s expansion of programming on the weekends.

The network will fill the Saturday 8 p.m. hour with Friday’s re-run of All In with Chris Hayes going forward, as it looks to bolster its weekend news programming.

Saturday Night Politics would end up being the most-watched Saturday 8 p.m. show in network history, and while the summer series regularly beat CNN in total viewers, it couldn’t match CNN Newsroom and other CNN Saturday 8 p.m. programming in the key A25-54 demo; and it couldn’t come anywhere close to matching the ratings of Fox News’ 8 p.m. show, Watters World.

A cable news veteran, MSNBC viewers will continue to see Deutsch regularly on Morning Joe and across MSNBC programs.

Saturday Night Politics wasn’t Deutsch’s first run as MSNBC host. He also had a brief stint as an MSNBC anchor in 2010, but was pulled as a result of a segment where he seemed to criticize his colleague Keith Olbermann.

Then, there was the prime time CNN talk show The Point, which was cancelled after just one week in April 2013. He hosted a show on USA named Donny!, where he played a fictionalized version of himself, in 2015. It lasted one season.

Adweek readers likely know Deutsch from his ad agency background. His father, David Deutsch founded Deutsch Associates and Donny Deutsch joined the company in 1983. He became chairman of the company –renaming it Deutsch Inc.– in 1989. He then sold Deutsch Inc. to Interpublic Group in 2000 for a reported $265 million.