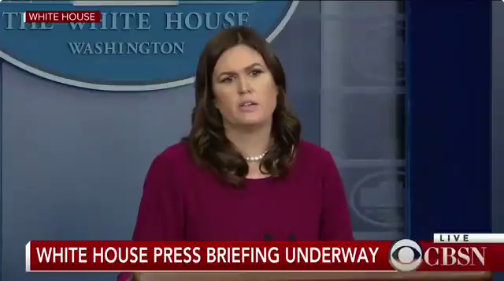 Today’s was one of the more tense White House press briefings to be televised in a while. Press Sec. Sarah Sanders responded to questions about sexual misconduct allegations against her boss, and went back-and-forth with reporters on the omnipresent theme of “fake news,” an especially hot topic particularly after the media experienced a rough week in the accuracy department.

“A number of outlets have had to retract, and change, rewrite and make editor’s notes to a number of different stories, some of them with major impacts, including moving markets. This is a big problem, and we believe it’s something that should be taken seriously,” was a response to a reporter’s question.

But before Acosta got in his question, Sanders responded, “But when journalists make honest mistakes, they should own up to them. Sometimes you do, but a lot of times, you don’t.”

Acosta attempted to respond, but Sanders remarked that she wasn’t finished, then stated, “There’s a very big difference between making honest mistakes and purposely misleading the American people, something that happens regularly. You can’t say it’s an honest mistake when you’re purposefully putting out information that you know to be false, or when you’re taking information that hasn’t been validated, that hasn’t been offered with any credibility, and has been continually denied by a number of people, including people with direct knowledge of the instance.”

Acosta responded, “OK, well can you cite a specific story that was intentionally false, that was put out there to mislead the American people?”

Sanders cited the report by ABC News’s Brian Ross, and then stated the network was correct in suspending him. (ABC News’s Cecilia Vega did not ask a question, despite Sanders calling out an ABC Newser).

Sanders then tried to move to another “Jim,” but Acosta was, shall we say, “persistent,” and ended up getting in the question he originally wanted to ask: “The president has denied the accusations of sexual harassment, but can you say whether or not they are false?”

“I am not going to respond,” Sanders said.