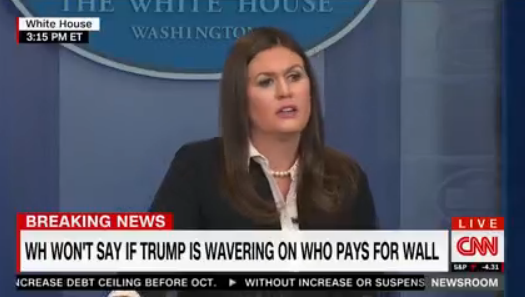 It’s been a few weeks since the White House held a televised press conference. 22 days to be exact.

Press Sec. Sarah Huckabee Sanders finally held one today. She opened by saying: “Good to be back. you guys don’t seem nearly as excited. I thought for sure there would be balloons or something. We’ll save that for next time, I guess.”

She then wished both CBS News chief White House correspondent Major Garrett, as well as her father former Arkansas Gov. Mike Huckabee a “happy birthday,” then took questions from TV and print and online newsers.

Questions included topics like the president’s relationship with the GOP; funding for the Mexican border wall and how Pres. Trump is threatening to shut down the government if they don’t find a way to pay for said wall; Afghanistan policy; the debt ceiling; the president continuing to cite a bogus story about Gen. Pershing killing terrorists in the Philippines by using “bullets dipped in pig’s blood”; Sen. Bob Corker‘s comments about how the president “may not have the stability nor the competence to be successful.” (Huckabee Sanders called those particular comments “ridiculous and outrageous that don’t dignify a response from this podium.”)

Here is a list some questions from TV newsers: