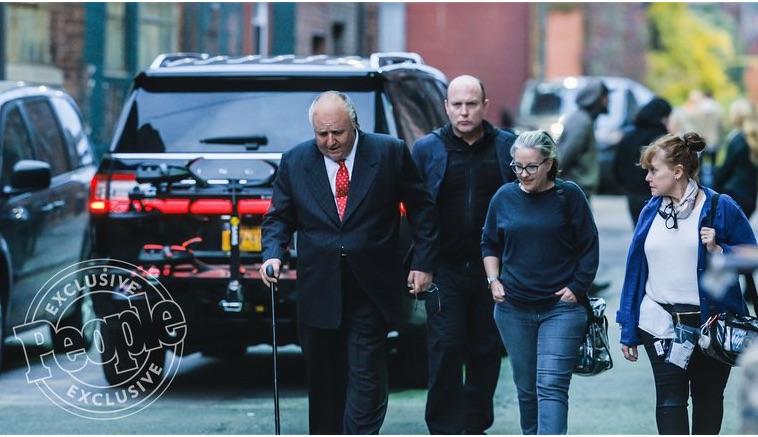 The cast members from the upcoming Showtime miniseries The Loudest Voice appear on the cover The Hollywood Reporter’s annual New York Issue, and they’re also the focus of Lacey Rose‘s cover story about the show.

This is all part of THR’s 35 most powerful people in media list.

The seven-part limited series—which debuts on June 30— is based on Gabe Sherman‘s 2014 book, The Loudest Voice in the Room, and will begin in the mid-1990s, when the late Fox News CEO Roger Ailes (who’s portrayed by Russell Crowe) created a conservative network we all know was meant to stand out against CNN and MSNBC. Over seven episodes, Rose writes, “the show is exploring how Ailes rose to power as a master of news as provocative stagecraft, trouncing his rivals and happily feeding a period of partisan acrimony.”

Some of the cast members turned to the Murdochs, friends and confidants of Ailes for advice. Others did not.

According to Rose, Sienna Miller (who plays Ailes’ widow Beth Ailes) relied on books, speeches and whatever she could glean from a few conversations with folks who know his widow.

Unlike Crowe, who tried and failed to connect with Beth Ailes, Miller didn’t even try to make contact with a woman who many involved suspect will sue, simply because her private life with Ailes factors prominently in the series.

“There was no need for me to get her involved, knowing that she was so against the idea of this being made,” says the actress. “I didn’t want to rub salt in the wound … and as soon as I start worrying about her and her feelings, I can’t tell the story we’re trying to tell.”

Naomi Watts plays Gretchen Carlson. Watts says she also avoided contact, citing an NDA that restricted Carlson from talking about her experience at Fox News. Watts says she leaned on books—Sherman’s and a pair from Carlson—along with a library of video.

The most revealing moments came not from Carlson’s time on air but rather from her beauty pageant past. The actress kept coming back to one performance in particular, where Carlson was playing the violin with a kind of doggedness that has come to define her. “She had this intensity and passion that felt almost otherworldly,” says Watts. “And that’s the woman who can take on the level of challenge she did” in meticulously building a case against Ailes that would lead to his ouster.

Seth MacFarlane plays former Fox News PR chief Brian Lewis, an interesting move considering McFarlane has made several series for Fox TV, and has been unafraid to publicly express progressive views in the past. MacFarlane said he’s had no dealings with anyone at Fox News over the years. New Fox Entertainment chief Charlie Collier remarked over the weekend at NAB that Fox News and Fox Entertainment are located 3,000 miles apart, literally and ideologically. Nevertheless, MacFarlane reached out to Lachlan and James Murdoch, with whom he apparently has a good rapport, and got the green light to co-star in a series about Ailes.

Crowe was the only prominent figure not to reach out to Sherman or the Murdoch brothers as a resource. His reasons for refraining to do so are interesting.

“[Gabe’s] got a perspective. He’s put that perspective down on paper. I’ve already taken it in. I don’t need more of [Roger’s] peccadilloes, I’ve got fucking 600 pages of it,” says the actor. “And, in a certain way, I’ve got to start being on Roger’s side a little bit—and even that’s a journey to totally expose him and bring him down.”

For the actor, accessing Ailes’ humanity was made easier by the personal conversations he was having with many from Ailes’ world. “They don’t give you any of the ‘I communed with the devil’—that’s not their experience,” he says. “It was, Roger’s the funniest person they knew, or he had this incredible perspective; and they all took great pains to tell me how entertaining he was.” Crowe absorbed it all, letting it influence his mindset and his portrayal. He also made a conscious decision not to speak directly with any of Ailes’ victims because, he felt, that’s not a viewpoint that Roger himself had.

The Hollywood Reporter will celebrate its annual Most Powerful People in Media this evening with a soiree at The Pool in Midtown Manhattan. Some of the cast members will surely be there.