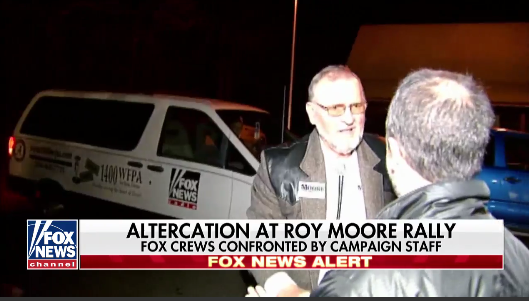 Fox News’s Jonathan Serrie reported on the incident during Fox News @ Night with Shannon Bream, saying the staffer “physically manhandled two Fox News photographers, pushing them away and grabbing their cameras.” The Fox News crew was credentialed to be at the event. WATCH:

The campaign has since apologized, but the move is in line with has become an increasing trend of physical violence against the press.

Earlier this year, Montana GOP congressman (then-candidate) Greg Gianforte body slammed a reporter from The Guardian to the ground after he asked the candidate a question about healthcare. Reporter Ben Jacobs‘s attorneys recently sent a cease and desist letter to Gianforte and members of his campaign team, demanding that they stop making “false and defamatory statements” about the incident.

Moore has been hammered by the media in recent weeks after deeply-sourced and on-the-record reports came out that he initiated romantic relationships with girls between the ages of 14 and 18 when he was in his 30s.

Moore has been accused of sexual misconduct by nine women. The candidate continues to deny the stories.