NEXT:Piers Morgan's Good Morning Britain Will Be Available to U.S. Audiences, Starting Tomorrow
PREVIOUS:Deputy Attorney General Rod Rosenstein May Resign From Trump Administration. Or He May Be Fired. Or Nothing May Happen at All 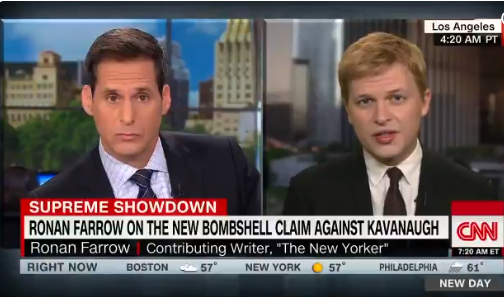 This story comes roughly a year after Farrow published a groundbreaking story involving allegations of sexual misconduct, harassment or abuse disgraced Hollywood producer Harvey Weinstein, (which ended up fetching Farrow a Pulitzer) as well as two more about former CBS Corp. chief Les Moonves, and former CBS News chairman/60 Minutes ep Jeff Fager. All three men were ousted from their respective organizations due at least in part to the stories (though Fager’s ouster was because he “violated company policy” and wasn’t directly related to Farrow’s story).

But for this particular investigative report, which hit The New Yorker website at around 7:50 p.m. ET on Sunday night, Farrow and Mayer spoke with a woman named Deborah Ramirez, a classmate of Kavanaugh at Yale’s. Ramirez has now decided to speak out as Dr. Christine Ford—who reluctantly came forward last Sunday with her sexual harassment accusation of her own against Kavanaugh from high school—has been scheduled to testify on Thursday before the Senate Judiciary Committee.

Ramirez admits that her memories contain gaps and that she was drinking at the time, but that “after six days of carefully assessing her memories and consulting with her attorney,” Farrow and Mayer write, “Ramirez said that she felt confident enough of her recollections to say that she remembers Kavanaugh had exposed himself at a dorm party, put his penis in her face, made her touch it without her consent as she pushed him away.”

Kavanaugh denied the allegation and several former classmates at Yale pushed back against Ramirez’s account. Farrow and Mayer write that “discussions among Ramirez and Kavanaugh’s classmates” recently spread to news organizations and to the Senate.

“This alleged event from 35 years ago did not happen,” Kavanaugh said in a statement to The New Yorker. “The people who knew me then know that this did not happen, and have said so. This is a smear, plain and simple. I look forward to testifying on Thursday about the truth, and defending my good name—and the reputation for character and integrity I have spent a lifetime building— against these last-minute allegations.”

Here’s Farrow speaking with George Stephanopoulos this morning on GMA about the story:

FULL INTERVIEW: @ronanfarrow on the bombshell new allegations from former Yale classmate against Brett Kavanaugh: “It is not accurate to say that those who knew him at the time dispute this.” https://t.co/BbURHAQ6EE pic.twitter.com/pUznAxDdfC

“This is a fairly high level of evidence for this kind of a case …This exceeds the evidentiary basis we’ve used in the past in several cases that were found to be very credible,” says @RonanFarrow of his reporting on the new allegations against Brett Kavanaugh. pic.twitter.com/Pl2hBOYaoL

“This is a story that is out there on the Hill. It is being investigated. It is a matter of news whether she tells her own version … or not. That put her in an exceptionally difficult version and I think the public deserved to hear her version”: @RonanFarrow on Deborah Ramirez pic.twitter.com/lIKz1JVxzN

Mayer appeared on CBS This Morning today. The co-hosts came out throwing fastballs, and got Mayer to admit that she and Farrow reached out to Ramirez…not vice-versa.

“We found classmates had been talking about this for weeks and months since July. There’d been an email chain of Yale classmates of Kavanaugh talking about will this thing come out? long before Christine Blasey Ford came forward” says @JaneMayerNYer pic.twitter.com/SkPdQRBv1r