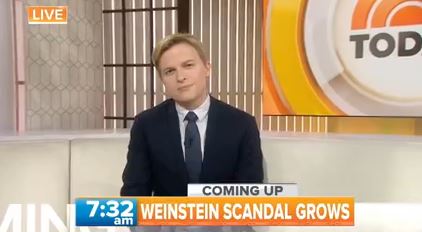 Catch and Kill, the new book from New Yorker correspondent Ronan Farrow, outlines how Hollywood can go about trying to shut down potentially unflattering stories.

According to The Hollywood Reporter‘s new cover story on the journalist, whose book comes out on Oct. 15, Farrow writes that the powerful Hollywood producer knew the exposé was coming and wanted to get out in front of it.

So how did Weinstein hope to “kill” the story? According to Farrow, he solicited the help of Dylan Howard, chief content officer of National Enquirer publisher American Media Inc. Perhaps the two could figure out a way to influence NBC News to put the kibosh on Farrow’s story.

Farrow was an NBC News investigative reporter during the time he was looking into Weinstein, and had previously been an MSNBC anchor.

THR’s Marisa Guthrie, who received an early read of the book by publisher Little, Brown, writes that according to Farrow, Howard pulled out several thick manila envelopes and laid out their contents on the table. The men huddled for hours, strategizing quietly. Weinstein had found their “in”: Matt Lauer.

Catch and Kill also includes new details of Harvey Weinstein’s personal interactions with NBC News and MSNBC chairman Andy Lack, NBC News president Noah Oppenheim and MSNBC president Phil Griffin, and he uncovers seven allegations of workplace sexual misconduct by Lauer that seem to go against the network’s stance that management had no knowledge of his behavior as well as seven NDAs—many with hush-money payouts—to accusers of Lauer and others at NBC. Multiple Lauer accusers, including the woman whose complaint to NBC’s human resources department resulted in Lauer’s ouster (Meredith Viera‘s at Sochi 2014, Brooke Nevils), tell their stories in detail.

NBC maintained that had no prior knowledge of Lauer’s indiscretions before he was fired in a statement to THR: “Only following his termination did we reach agreements with two women who had come forward for the very first time, and those women have always been free to share their stories about Lauer with anyone they choose.”

*UPDATE: Lauer has responded to Farrow’s book and the allegations brought forth.