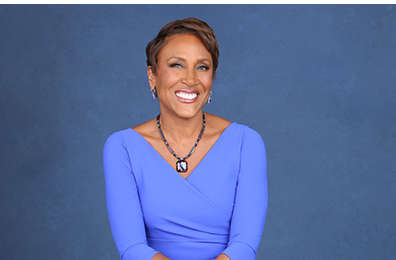 ABC is bringing out the big guns for its first-ever NFL Draft coverage this year. The network has tapped Robin Roberts to host its Round 1 coverage on Thursday, April 25, live from Nashville.

Roberts made the announcement this morning on Good Morning America. She’ll also report from Nashville for GMA on April 25.

As she hosts ABC’s Round 1 coverage from 8-11:30 p.m. ET on April 25, Roberts will conduct interviews from an ABC set on Broadway in Nashville, and highlight the prospects picked in the first round. She’ll be joined by co-host Rece Davis and ESPN’s College GameDay crew.

“As a former college athlete and devoted football fan, I am thrilled to host such an exciting event that honors the hard work and talent of student athletes,” said Roberts in a statement. “I’m looking forward to working with my ESPN colleagues again and watching dreams come true!”

Rob Mills, svp, alternative series, specials and late night, ABC Entertainment, called Roberts “a master at her craft” and said the GMA co-anchor “will be a resonating voice that brings life to the stories of this year’s crop of talented athletes and the families that support them.”

The gig will be a homecoming for Roberts, who previously worked as a SportsCenter anchor and covered the NFL Draft for ESPN.

This is the first year that ABC will broadcast all three days of the NFL Draft, joining ESPN and the NFL Network in covering the annual event.