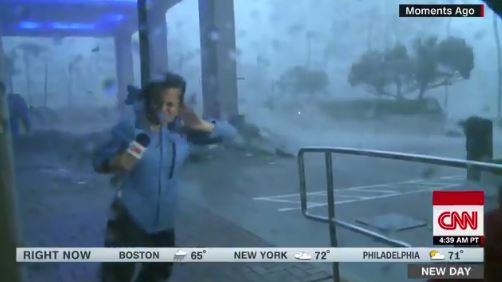 Category 4 Hurricane Maria made landfall near Yabucoa, along the southeastern coast of Puerto Rico this morning around 6:30 a.m. And all the U.S. TV news networks have correspondents there to cover it, with most of them in the capital of San Juan.

The Weather Channel’s Paul Goodloe took shelter for his liveshot before 8 a.m. as the winds were getting too strong. CBS’s David Begnaud recorded a look-live for CBS This Morning’s 8 a.m. ET news segment, before he had to go back into his hotel.

Hurricane Maria is smashing into Puerto Rico this morning, which is expecting 12-18 inches of rain https://t.co/RobkJDJPOd pic.twitter.com/QDSaFtRiGR

CNN’s Leyla Santiago was reporting live on CNN’s New Day when Maria’s winds became too much:

Other CNNers covering the storm in Puerto Rico: Nick Paton Walsh, Rafy Rivera, Rafael Romo and Nick Valencia. Michael Holmes is in Antigua and Amy Lizardo and Polo Sandoval are in the Dominican Republic.

This is how a hotel in San Juan, Puerto Rico prepared for Maria as it moves over the island.

No part of the island of Puerto Rico is being spared as evidenced by this radar image:

Definitely one of the most sickening radar loops I've seen in a long time. Praying for Puerto Rico. #Maria pic.twitter.com/R0ihjyKH4i

Fox News’s Steve Harrigan, after covering Harvey in Texas and Irma in Florida, is now in San Juan for Maria. “This looks like a direct hit, in the worst possible place.”