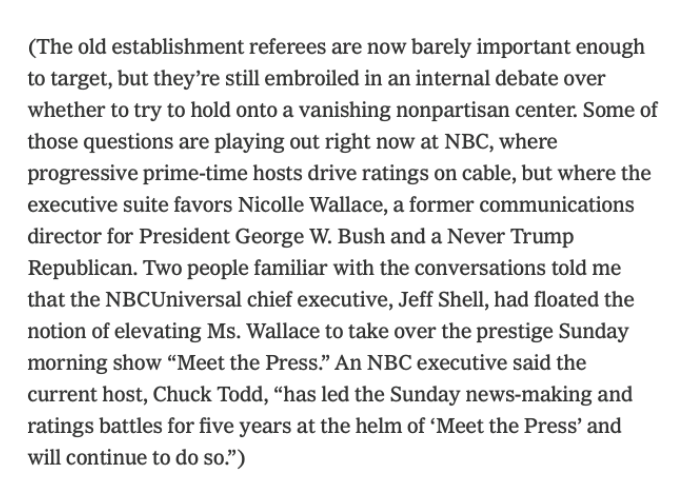 This would have been (or would be) a huge move by the network. Over on the company’s cable news channel, MSNBC, Wallace is already poised to take over Todd’s 5 p.m. hour, which will give her two hours on MSNBC each weekday. If given the opportunity to lead MTP, Wallace would, in essence, become the top on-air politics voice at NBC News.

Todd’s MTP Daily is being moved to the 1 p.m. ET hour on MSNBC, and he will also be getting his own politics program on NBCU’s Peacock streaming service.

On the flip side, there’s the axiom, “If it ain’t broke, don’t fix it.” Meet the Press was the No. 1 Sunday show both in Total Viewers and among Adults 25-54 (the two categories the industry pays the closest attention to) in the month of July, marking its third straight month at No. 1 and dominating the demographic most-valued by TV news advertisers for the 12th month in a row.

When reached by Smith, NBC News shot down the idea of removing Todd from the broadcast, citing ratings success.

NBC News’ official statement to TVNewser was the same as the one the network provided to Smith: “Chuck Todd has led the Sunday news-making and ratings battles for five years at the helm of ‘Meet the Press’ and will continue to do so.”