NEXT:Wednesday, Dec. 2 Scoreboard: Rachel Maddow Is Most-Watched For 2nd Straight Night; Tucker Carlson No. 1 in Demo
PREVIOUS:November 2020 Cable Network Ranker: Fox News Is No. 1 in Total Viewers, CNN Is No. 1 in the Total Day Demo 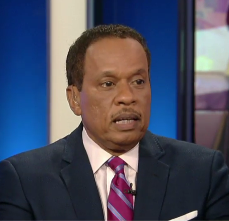 The Five will broadcast remotely “for the foreseeable future,” according to Fox News, after host Juan Williams reportedly tested positive for Covid-19.

Williams tested positive for the coronavirus on Thursday and is quarantining, according to The New York Times. He taped The Five on Wednesday at Fox News’ Manhattan studio, alongside—though socially distant from—his co-hosts, including Jesse Watters and Greg Gutfeld.

Williams was absent from The Five on Thursday, and the other hosts appeared remotely.

A Fox News Media spokesperson declined comment to TVNewser about Williams, citing employee privacy. But the spokesperson did release the following statement, confirming that The Five would be filming remotely:

“Since the start of the pandemic, Fox News Media has implemented strict company-wide protocols adhering to all CDC and state guidelines, including regular testing of all in studio on-air personalities, mask mandates and daily health assessments for all employees entering the building. We will continue to take all necessary precautions to ensure the safety of our staff, including broadcasting The Five via home studios for the foreseeable future.”

Williams returned to work Monday after a nearly two-week vacation, and was tested shortly after, according to the Times.