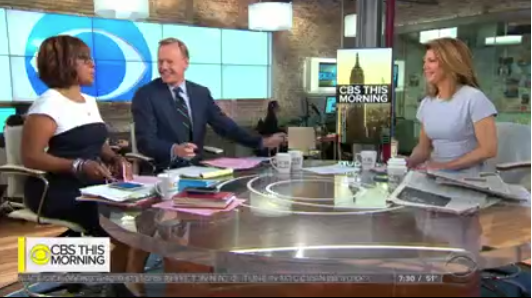 It appears Susan Zirinsky has just made her first massive move as the president of CBS News, a role she assumed on March 1.

According to a report in Variety, CBS This Morning:Saturday co-host Anthony Mason and CBS News correspondent Tony Dokoupil will join Gayle King as the new co-hosts of CBS This Morning.

Current co-hosts John Dickerson and Norah O’Donnell would depart the program, and this would effectively make King the centerpiece of the show.

TVNewser has not been able to independently confirm this report, and CBS News declined comment.

Mason, in particular, is well-known to the CBS News audience. In addition to his many years as a CBS News correspondent, he served as the bridge between Scott Pelley and Jeff Glor as CBS Evening News anchor, and presently co-hosts CBS This Morning:Saturday.

Dokoupil, who recently welcomed a baby boy, has reported for all CBS News programming (with the exception of 60) since joining the network in July 2016. He joined CBS from MSNBC.

According to the Variety report, Dickerson could take on a 60 Minutes correspondent role. It is unknown what O’Donnell’s role would be. There has been some speculation in the industry for weeks that O’Donnell would supplant Jeff Glor as CBS Evening News anchor, and the newscast would move to Washington, where O’Donnell’s family resides.

If Glor were to be taken off of the evening newscast, it is unclear what his role would be. He has many allies inside and outside of the network.

CBS News has tinkered with CBS This Morning a number of times over the past couple of years. The show went on an impressive ratings run in the months leading up to and after the 2016 election. But that momentum seemed to come to a halt after the November 2017 departure of Charlie Rose, a departure which came a day after The Washington Post published a story about eight women who had accused Rose of sexual harassment.

CBS moved Dickerson off of Face the Nation to the morning show in January 2018 , and Bianna Golodryga joined the program as a fourth co-host in October 2018. Golodryga’s tenure on the program lasted fewer than six months. Neither move has paid dividends in the ratings department.

One day after Golodryga’s departure in April 2019, the network named Diana Miller the broadcast’s first-ever female ep. Ryan Kadro had served as the program’s ep from 2016 through January 2019.

Despite an impressive number of news-making interviews in 2019 to-date, the hard news-focused CBS This Morning has remained stuck in third behind the more established GMA and Today, and it’s experiencing a more significant year-over-year audience decline than the ABC and NBC morning shows.