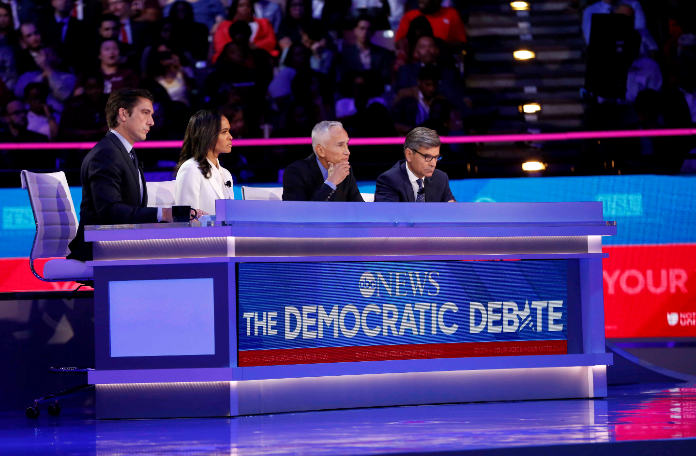 If one report is accurate, ABC News is expected to co-host a Democratic primary debate with WMUR-TV–the Manchester, N.H.-based ABC affiliate–in February 2020.

The televised debate would be held right before the New Hampshire primary, which is Feb. 11, 2020.

If true, this would be the second debate the network has hosted in the 2020 election cycle. It co-hosted the third Democratic primary debate in September with Univision.

According to Politico, the New Hampshire debate plans have not been finalized and it’s possible a print or digital partner could be added to the debate. For instance, The New York Times partnered with CNN in co-hosting a Democratic debate last month, while The Washington Post is partnering with MSNBC for the next Democratic debate later this month.

The Democratic presidential contenders are also expected to debate in Iowa early next year, with the Iowa caucus scheduled to take place on Feb. 3, 2020, eight days before the first primary for the 2020 election.

It’s quite possible CBS would be involved with that Iowa-based debate. In Nov. 2015, KCCI-TV, CBS’ affiliate in Des Moines, and The Des Moines Register co-hosted a Democratic debate in Iowa. Face the Nation host John Dickerson, CBS News congressional correspondent Nancy Cordes, the CBS News congressional correspondent; Kevin Cooney, an anchor for KCCI-TV in Des Moines; and Kathie Obradovich, a political columnist for The Des Moines Register moderated that one.

A similar partnership would make sense, and according to Politico, The Register has expressed interest in co-hosting another primary debate.

Plus, CBS is the only major broadcast or cable news network not named Fox News that has yet to host a 2020 Democratic primary debate.

DNC chairman Tom Perez announced back in March that Fox News would not have an opportunity to host a DNC-sanctioned primary debate this cycle.