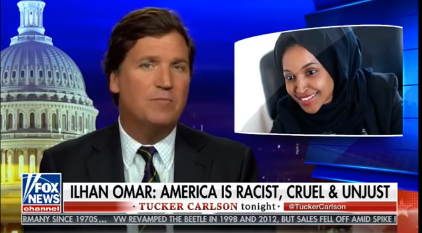 “After everything that America has done for her and for her family, she hates this country more than ever,” he claimed.

He then went on to claim she’s “living proof that the way we practice immigration has become dangerous to this country.”

The congresswoman responded on Twitter by calling him as a “racist fool,” and then not so subtly called for an advertiser boycott of his top-rated 8 p.m. program.

Not gonna lie, it’s kinda fun watching a racist fool like this weeping about my presence in Congress 🤣🤣

No lies will stamp out my love for this country or my resolve to make our union more perfect.

They will just have to get used to calling me Congresswoman! https://t.co/nRS13yWivK

Advertisers should not be underwriting hate speech. https://t.co/iQdMJ0heXR

It’s common for Tucker Carlson to make racist & sexist comments on his show, but this is a new low. @IlhanMN deserves an apology — Tucker deserves to be fired. This kind of hate is inexcusable, and it’s on all of us to call it out and demand better. https://t.co/lP2eUJ2u8x

On the other side— Carlson’s colleague Mark Levin, a conservative host on the network, came to his defense:

Once again, CNN comes to the defense of rabid anti-Semite Ilhan Omar https://t.co/XNuN4HC4vj

“Anyone who values democracy and free expression should be gravely concerned when members of Congress demand that their critics be silenced. Tucker will address this on tonight’s show.”