NEXT:Monday, Aug. 17 Scoreboard: MSNBC, CNN Split Prime Time on Day 1 of the 2020 DNC
PREVIOUS:Night 2 of the 2020 DNC Is Highlighted by Jill Biden's Closing Speech and a Virtual Roll Call 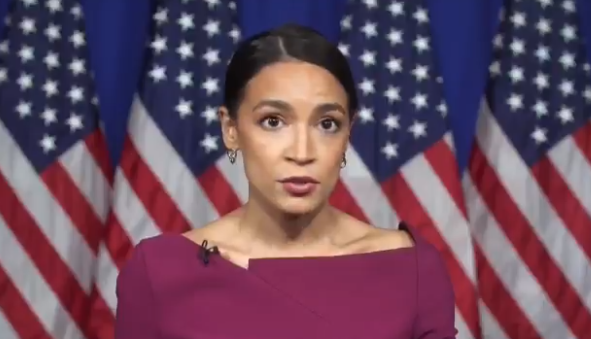 Rep. Alexandria Ocasio-Cortez (D-N.Y.) ripped into NBC News late last night for a misleading tweet which makes it seem as though the congresswoman does not support Joe Biden.

“So @NBCNews how are you going to fix the incredible amount of damage and misinformation that you are now responsible for?” she tweeted at 1:15 a.m. ET. “Because a 1:15am tweet to slip under the radar after blowing up a totally false and divisive narrative across networks isn’t it.”

Rep. Ocasio-Cortez, perhaps the highest-profile figure to publicly express support for the Vermont senator in recent years, followed DNC rules by nominating Sen. Bernie Sanders during the roll call since he had passed the delegate threshold.

She was the second person to place Sen. Sanders in nomination. Former UAW president Bob King was first to offer his nomination, whom he referred to as a “great champion of the working class.”

You can watch the full 90-second nomination of Sen. Sanders by Rep. Ocasio-Cortez at the end of this post.

Many Americans, including people who have worked in government, know how the nomination process works, but apparently there are some political reporters, lay people, and perhaps most importantly in 2020, social media editors who don’t.

In a tweet after her speech, Rep. Ocasio-Cortez explained her nomination for Sen. Sanders at #DemConvention, and extended her “deepest congratulations” to Joe Biden. https://t.co/DIU4YYhQYV 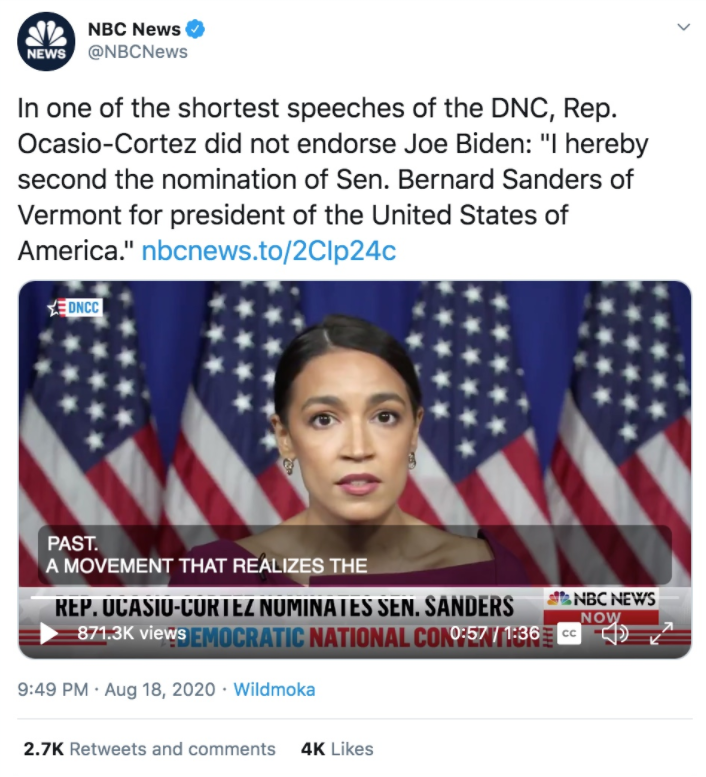 This tweet should have included more detail on the nominating process.

We have deleted the tweet to prevent its further spread, but it can be seen here for the record.

Ocasio-Cortez was asked by the DNC to second Sanders’ nomination. The nomination is a procedural requirement of the convention.

Ocasio-Cortez has previously endorsed Biden, & her speech was similar in length to other nominating speeches.

Ocasio-Cortez has previously endorsed Biden, & her speech was similar in length to other nominating speeches.

But the representative from New York wasn’t going to let the original mistake go easily, especially considering her massive reach and that her followers may have interpreted her message differently. She is pro-Biden, not anti-Biden.

You waited several hours to correct your obvious and blatantly misleading tweet.

It sparked an enormous amount of hatred and vitriol, & now the misinfo you created is circulating on other networks.

All to generate hate-clicks from a pre-recorded, routine procedural motion. https://t.co/crDlEymgMD

This is completely unacceptable, disappointing, and appalling.

The DNC shared the procedural purpose of my remarks to media WELL in advance. @NBC knew what was going to happen & that it was routine.

How does a headline that malicious & misleading happen w/ that prior knowledge?

So @NBCNews how are you going to fix the incredible amount of damage and misinformation that you are now responsible for?

Because a 1:15am tweet to slip under the radar after blowing up a totally false and divisive narrative across networks isn’t it. https://t.co/zf6Wqiotvv

When we reached out to NBC News Digital for comment, a spokesperson pointed us to the above tweets and corrections (1/2 and 2/2). The network also updated its original article and blog post and added a separate blog post for additional context.

Below, Rep. Ocasio-Cortez nominating Sen. Sanders during the virtual convention.

.@AOC nominates Senator Bernie Sanders for president of the United States ‘out of the love for all people’ https://t.co/8mtXh0wSov pic.twitter.com/GYNpaqy4RQ